The prevalence of overweight and obesity is a global concern. Therefore, various weight-loss diets have been developed. A low-carbohydrate weight-loss diet, also known as the Atkins diet, is one such diet. In the United States, the proportion of protein, fat, and carbohydrates in the diet is recommended to be 20-35%, 10-35%, and 45-65%, respectively. Carbohydrates supply us with energy. In a low-carbohydrate weight-loss diet, intake of carbohydrates is kept extremely low (9%). Energy is supplied by fat inside the body, which results in a decrease in body weight. The diet results in an extremely high proportion of fat (62%), while protein is average (29%). The diet certainly reduces body weight and has gained widespread popularity. However, the metabolite profiles of such a diet are shown to be detrimental for colonic health. For example, butyrate, a key short chain fatty acid in colonic homeostasis, significantly decreased in fecal samples. Therefore, a concern for the long-term effect on the health of this diet needs to be expressed. The present case seems to substantiate such a concern. 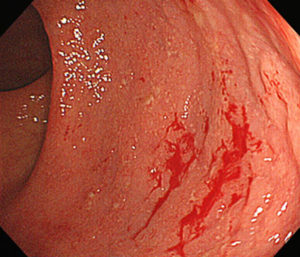 Fig. 1. Diffuse inflammation in the large bowel (the rectum). A small amount of blood is also observed.

A 36-year-old Japanese man, 172 cm in height and 72 kg in body weight, started to follow a low-carbohydrate weight-loss diet in August 2011. He decreased his white rice consumption to approximately one-third and consumed meat and minced/processed meat every day. His body weight decreased from 72 kg to 66 kg, as desired, and he maintained the diet. Beginning in April 2013, he often noticed bloody stool. He tested positive for fecal occult blood during a periodic health examination in October 2013. Further examination by endoscopy revealed diffuse inflammation in the rectum (Fig. 1). He was diagnosed as having ulcerative colitis. He learned about a semi-vegetarian diet, a kind of plant-based diet, for inflammatory bowel disease (collective term for ulcerative colitis and Crohn’s disease), and he tried to replace the low-carbohydrate weight-loss diet with a semi-vegetarian diet. He then noticed a decrease in the amount of blood in his feces but the bloody stool persisted. He underwent an 11-day educational hospitalization for ulcerative colitis in late March 2014. A semi-vegetarian diet was provided during hospitalization. Bloody stool disappeared during hospitalization without medication. He was advised to continue the semi-vegetarian diet after discharge. He remained in remission until January 2015, when he again noticed faint blood in his stool. He mentioned that he had been too busy to maintain the semi-vegetarian diet and that he would try to resume the semi-vegetarian diet. 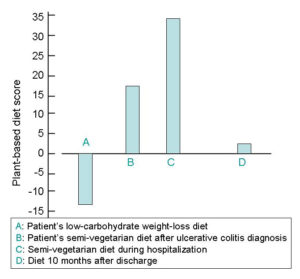