In many research laboratories that use small animals, anesthesia is used for a variety of procedures. The most common and widely used anesthetic gas is isoflurane because it can be easily adjusted to control how “deep” under anesthesia the animal is. For years, a passive vaporizer has been used to introduce isoflurane into the animal’s breathable gas, otherwise known as a traditional vaporizer (TdV, Fig. 1). Unfortunately, the gas flow rate for these traditional systems is typically much higher than what is required for rodents. Thus, a new digitalized vaporizer has been created to drastically decrease the amount of carrier gas and isoflurane needed to keep an animal at the same “depth” of anesthesia. We refer to this system as an integrated digital vaporizer (IDV, Fig. 1). There are several advantages to using the IDV: 1) it saves space since it is small enough to fit on a tabletop, 2) it can use room air so it does not require large tanks of compressed gas, and 3) it gives the user the ability to precisely control anesthetic levels and flow rates. Because the IDV uses less isoflurane and carrier gas, it also consumes fewer charcoal canisters, which are used to safely catch the exhausted anesthetic. 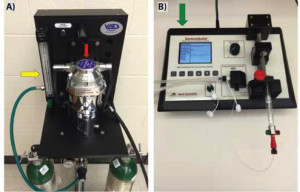 In order to quantitatively compare the TdV to the IDV, we designed an animal study to measure the amount of isoflurane, charcoal canisters, and oxygen or air needed by each system to keep a mouse at the same level of unconsciousness for 2 hours. This level of unconsciousness was measured through physiological factors such as heart rate, breathing rate, and body temperature, which were recorded every 15 minutes throughout each 2-hour period. In the first part of the study, 10 mice were each anesthetized with either the TdV or the IDV for 2 hours, allowed to recover for several days, and then switched to the opposite vaporizer for a second 2-hour session. Both systems were used with the same settings. The second part of the study was similar to the first except both systems were used with their manufacturer-recommended settings. We found that while there was no significant difference in the amount of isoflurane volume and number of charcoal filters used by each machine during the first part where the settings were the same, the TdV used a significantly larger amount of isoflurane and charcoal canisters compared to the IDV when manufacturer-recommended settings were employed. Additionally, there was no significant difference in the physiological factors across the varied testing conditions, meaning that the mice were kept at the same anesthetic depth with a lower amount of isoflurane using the IDV. We expanded our 2-hour session values at recommended settings to show that if each vaporizer was used for 2 hours, 5 days a week for 52 weeks, the TdV would use 12 bottles of isoflurane and the IDV would only use 2. Similarly, the TdV would use 21 charcoal filters while the IDV would only use 6. These hypothetical values suggest that the IDV, in addition to potentially exposing laboratory personnel to less isoflurane, could also reduce supply costs. Though there were some inconveniences with the IDV such as the way the isoflurane syringe is refilled or that it cannot handle large air flow rates (>1 L/min) like the TdV, it is still a great option for research groups that may use substantial amounts of anesthetic gas or have limited laboratory space. Ultimately, the possibility of reducing the cost of laboratory supplies, saving on laboratory space, and decreasing exposure to isoflurane is not only appealing to those on a budget, but could also improve laboratory safety.