Neuropeptide Y (NPY) is a protein involved in the complex regulation of a variety of physiological functions that range from feeding to emotions. In the central nervous system NPY is able to influence autonomic nervous system regulation of cardiac function, via activation of NPY-Y1 receptors (Y1Rs). Moreover, NPY-Y1R signaling seems to play an important role in dampening sympathetic nervous system activation during the stress response. However, the specific brain areas, the neural circuits and the mechanisms involved in this modulation have not been fully identified yet. 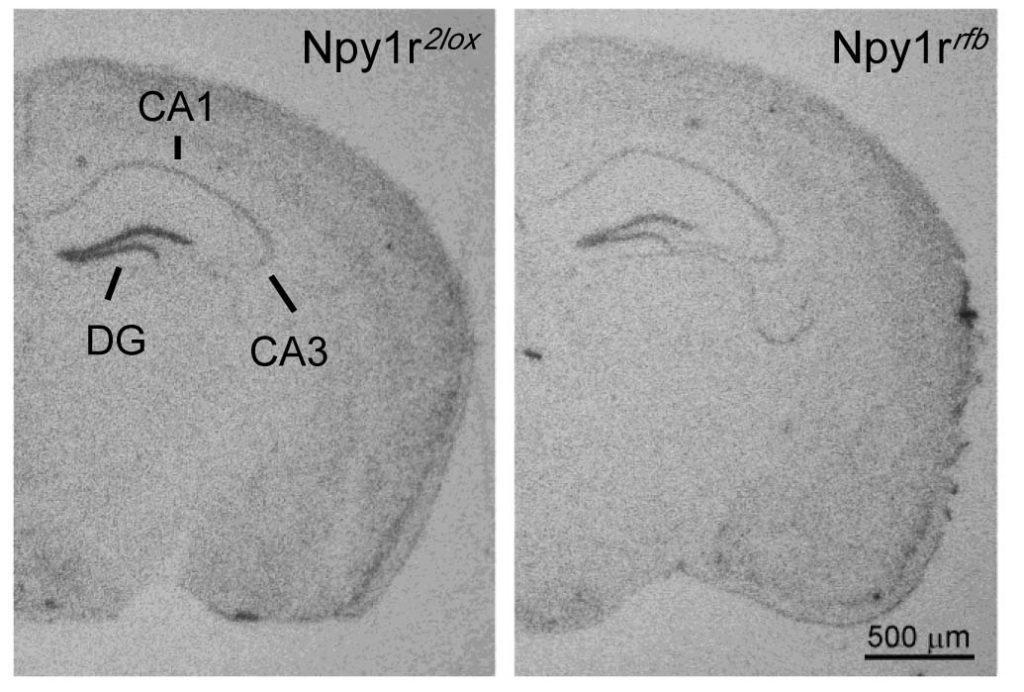 Transgenic animals are often used to investigate the functions of genes and their products. Here, a genetically modified mouse was used, in which the inactivation of Y1R gene (Npy1r) was restricted to specific neurons in the post-natal brain by using a combination of two powerful genetic engineering tools (Cre-loxP and tet-off systems). This approach was used to evaluate the role of hippocampal Y1Rs in the central autonomic control of cardiovascular function.

In order to achieve this goal, radiotelemetric transmitters were implanted in 4-month-old male mice exhibiting reduced forebrain expression (rfb) of the Y1R (Npy1rrfb, n=10) and their corresponding controls (Npy1r2lox, n=8). The transmitter’s body was surgically inserted in the abdominal cavity and two electrodes were fixed to the inferior part of the sternum and close to the right atrium of the heart, respectively. Electrocardiograms (ECG) were recorded (i) during resting conditions, (ii) under selective pharmacological manipulation of cardiac vagal activity, and (iii) during acute and chronic psychosocial stress challenges (based on social defeat test). Then, ECG recordings were analyzed to assess the variability of heart rate (HRV) and the modulatory role of the two branches of the autonomic nervous system. The results obtained by in situ hybridization confirmed that Npy1rrfb mice showed a lower Npy1r mRNA hippocampal expression, especially in the dentate gyrus granule cell layers and in the CA1 region (Fig. 1). At rest, Npy1rrfb mice showed (i) a higher heart rate (Fig. 2), (ii) a reduced heart rate variability, and (iii) a lower vagal tone compared to wild-type controls. Following pharmacological vagal inhibition with a muscarinic receptor antagonist (methylscopolamine, 0.1 mg/kg), heart rate was higher in control but not in Npy1rrfb mice compared to their respective baseline values. 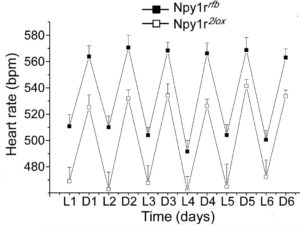 Thus, resting tachycardia of Npy1rrfb mice might be due to their reduced cardiac vagal modulation. Furthermore, the stress-induced increase in heart rate was smaller in Npy1rrfb mice compared to their corresponding controls, arguably because of a concomitant lower parasympathetic withdrawal. In conclusion, the role of central Y1 receptor signaling in autonomic regulation of cardiac function was evaluated. The findings here obtained suggest that reduced expression of Y1Rs in mice leads to a decrease in resting vagal neural modulation and heart rate variability, which in turn may provoke a reduced cardiac autonomic responsiveness to an acute stressor. However, Y1r deficiency does not seem to modify heart rate and heart rate variability in response to a chronic psychosocial stress paradigm. Finally, this study also indicates that reduced expression of Y1Rs in mice is associated with an increase in heart rate and a decrease in vagal neural control of heart rate at rest.