Development of thermoelectric gas sensor for breath analysis: How can we improve the gas selectivity?

Breath gas contains a range of marker gases that can be associated with disease and metabolism. For instance, the monitoring of breath H2 is useful for measurement of orocecal transit time, colonic fermentation, abnormal fermentation and irritable bowel syndrome. CH4 is also generated by the fermentation of carbohydrate by intestinal bacteria. That is, breath analysis is expected as the early diagnosis technique of diseases because breath gas information includes the human health condition. To analyze or monitoring of the breath gas, several techniques, such as gas chromatography, laser spectroscopy, and gas sensors, have been used. Among them, gas sensor is simple, fast, cost-effective and useful for the detection of inorganic and volatile organic compounds (VOCs). We have developed the micro-thermoelectric gas sensor (micro-TGS) for breath analysis of target gases (H2, CO, and CH4). The micro-TGS is one of the inflammable gas sensors with promising gas selectivity and responsivity, and shows a clear linear relationship to allow the detection of gases at the ppm level.

Fig. 1 The structure and working principle of the micro-TGS. (a) optical images of the micro-TGS, and (b) schematic illustration of gas detection by thermoelectric effect.

Figure 1 shows the structure and working principle of the micro-TGS. Hot side (point A) indicates a position to commonly put a combustion catalyst, and cold side (point B) shows the position of without combustion catalyst. Thermoelectric pattern, which can convert from temperature difference DT, to voltage DV, is incorporated between the point A and point B. By the gas flow on surface of combustion catalysts, the combustion heat occurs by oxidation reaction of catalyst. Therefore the gases can detect by the transform of combustion heat to voltage signal by thermoelectric effect. From the above description, the characteristic of gas selective detection depends on the combustion catalysts of composition and operation temperature of micro-TGS. However the CO or CH4 detection in human breath of micro-TGS is difficult in comparison with the case of H2 detection, because CO and CH4 gas needs the high temperature for oxidation reaction by catalyst. In this temperature condition, H2 gas is also oxidized together with CO or CH4 in human breath. Therefore, new idea to improve the gas selectivity of CO or CH4 against H2 gas is needs. Herein we report the new sensor design of double catalysts for micro-TGS, to improve the sensing properties and selectivity of micro-TGS. By putting another catalyst for H2 oxidation on the point B, the control of gas selectivity is attempted. 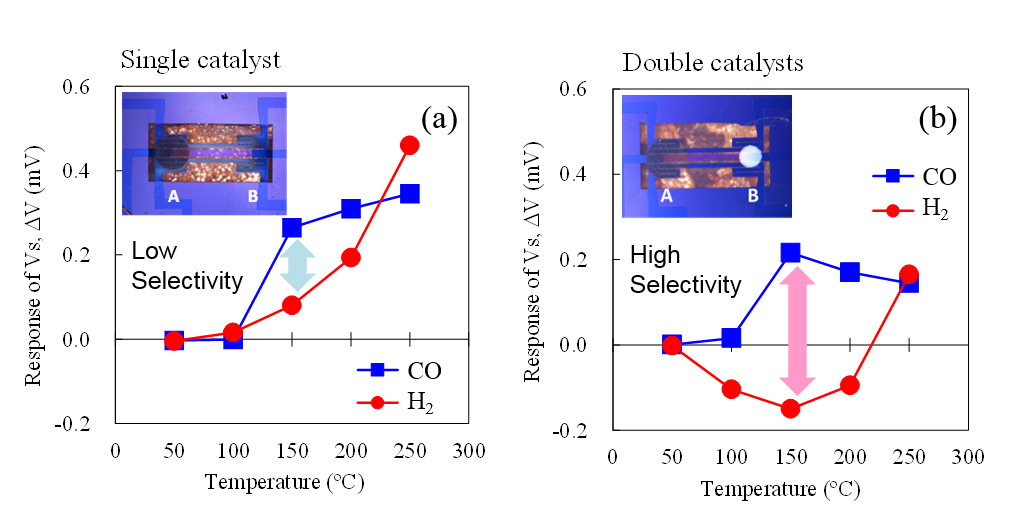 Fig. 2 The H2 and CO gas response with respect to catalyst temperature of micro-TGS with single catalyst (a) and double catalyst (b) structure.