A key to develop nanodevices with high performance for biosensors applications is to explore advanced functional nanomaterials . Among these materials , 2D – based nanohybrids clearly stand out in the field of electrochemical immunosensors for clinical biomarkers, where they offer unparalleled advantages originated by their fascinating properties.

Together with graphene, a  2D-nanomaterial with amazing properties, other 2D-nanomaterials known as graphene-like 2D-layered nanomaterials (GLNs) which include, among others, boron nitride (BN) nanosheets and transition metal dichalcogenides (TMDs, e.g. MoS2 and WS2), have attracted a significant interest in the development of electrochemical (bio)sensors. 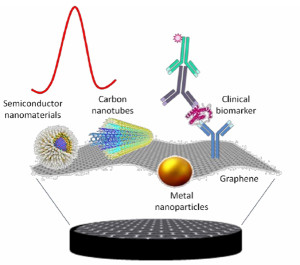 Graphene, an emerging 2D material discovered in 2004, is a thin, densely packaged layer of carbon atoms that are bonded together into a hexagonal honeycomb lattice structure. Among its fascinating properties, it has been classified as the thinnest compound known to man at one atom thick, the lightest material known, the strongest compound discovered, the best conductor of heat at room temperature and also the best conductor of electricity known. Related with the development of electrochemical sensors are also such characteristics as its wide potential window, exceptional biocompatibility, chemical inertness, high specific surface area and easy functionalization, mass production and suitability for various modes of sensing and detection. However, the fact that these unique structural, chemical, and electronic properties only emerge in the 2D planar direction together with some inherent disadvantages of graphene, such as easy aggregation, poor solubility and/or processability, represent significant concerns in the development of electrochemical biosensors. Therefore, new efforts have attempted to address these weaknesses by developing hybrid nanostructures wherein graphene acts as a scaffold for anchoring other nanomaterials. These hybrids, apart from taking full advantage of the superior properties of graphene and the corresponding functionalizing nanomaterial, are also endowed with new desirable properties and can function as novel electrode materials, signal amplifiers, and catalysts of the electrochemical reaction of the in situ generated product during the biosensing event. To date, the most common hybrid 2D-nanomaterials applicable to electrochemical biosensing include graphene-carbon nanotubes, graphene-semiconductor nanomaterials and graphene-metal nanomaterial hybrids.

The several recent strategies for using such 2D-nanomaterial heterostructures in the development of modern electrochemical immunosensors, both for tagging or modifying electrode transducers, summarized and discussed in this review, demonstrate the attractive advantages offered by these 2D-hybrid nanomaterials for enhancing and superseding the capabilities of current analytical immunosensing methodologies by permitting rapid and highly accurate clinical biomarkers. However, this field is still new, many points needing to be addressed.

Significant efforts should be devoted to develop new methods for commercial-scale production of 2D-hybrid nanomaterials with high level of uniformity and reproducibility, which lead to maximization of their outstanding characteristics and their functionalization with defined structure and properties, in a more cheap, effective and simple way. Researchers should also make more effort on exploring these novel biosensor designs in real applications and not only in standard buffered solutions. Although accurate detection of various analytes has been achieved recently, the simultaneous detection of multiple targets in complex samples still remains unsolved, and the possibility to controllably tune the nanomaterials’ characteristics, not only the choice of functional components, but also the spatial organization/assembly and geometric properties of the complex nanostructures, for simultaneous analysis of various analytes is yet to be explored. Furthermore, the integration of these 2D-nanohybrids based electrochemical biosensors into different analytical devices remains to be eye-caught in clinical point-of-care analysis.

In conclusion, although very promising, the field of 2D-nanomaterials hybrid immunosensors is still in its infancy and a number of challenging issues remain to be addressed. Fortunately, given its great potential, advances in this field, expected to occur rapidly, promise a better future for the biosensor industries. It is also expected that ahead innovative research on this field will couple with other major technological advances, such as integration with real-time monitoring, lateral-flow, lab-on-a-chip, and 3D printing techniques for the development of next-generation biosensors.