Central Diabetes Insipidus (CDI) is a disorder caused by a deficit in the production of arginine vasopressin (AVP), a hormone that acts by binding to AVP receptor 2 (AVPR2) on the kidney collecting tubule cells and produces water reabsorption (antidiuresis). The absence of AVP causes the excretion of copious amounts of urine (polyuria), a reduction in urinary sodium excretion and osmolality (“tasteless” urine), a compensatory water intake (polydipsia), and a rise in serum sodium concentration and osmolality (Tab. 1). Urine flow is persistent and urinary sodium excretion (natriuresis) is lower, even during saline infusion. The usual treatment for CDI patients is desmopressin, a synthetic analog of AVP that exerts an even more potent regulatory effect than that of the hormone itself.

Tab. 1. General characteristics of patients with CDI in comparison to a healthy population.

Various genetic disorders have been implicated in the development of CDI. They are frequently related to mutations in the AVP-Neurophysin II gene. However, this hereditary CDI (hCDI) form accounts for only  1–2% of all cases. Most cases are acquired (aCDI) and caused by brain damage of the AVP neurosecretory system, i.e., mediobasal hypothalamic (MBH) damage, pituitary stalk compression, and lesions of hypophysis (hypox) or neurohypophysis (neurohypox). However although this neuroendocrine system is mainly involved in the secretion of AVP, it is also relevant for the production of other neuropeptides closely related to hydromineral regulation, specially oxytocin (OT), a hormone involved in the excretion of body sodium (Fig. 1). 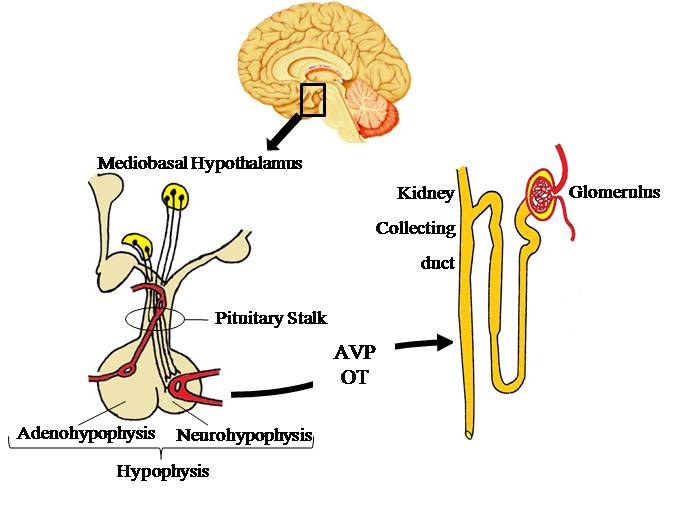 Thus, it seems likely that aCDI represents a more complex syndrome in comparison to hCDI. This possibility is in accordance with studies of different experimental models. In this regard, one of the most important differential factors observed is related to OT, which is available in hCDI but not aCDI animals.

The main animal model of hCDI is the homozygous Brattleboro rat strain. However, in contrast to human CDI, these Brattleboro animals respond to saline administration in a similar manner to intact rats, i.e., with a rise in urinary osmolality and natriuresis, regulatory responses that have been attributed to OT availability.

In neurohypox rats, OT administration increases their renal capacity. Furthermore, OT administration within the physiological range enhances the natriuretic response to AVP, reversing their renal sodium excretion deficit. In this line, hypox animals receiving combined AVP-OT treatments show synergic (potentiated) natriuretic effects, although the peak sodium excretion remains below that in intact rats. OT administration also enhances natriuresis and reduces the urine excretion and the polydipsic response of animals with MBH lesions. It therefore appears that, in addition to CDI-induced abnormalities involving the AVP system, the alterations in this syndrome cannot be easily explained if only the AVP neurohormonal system is considered. Other specific neurobiological systems disrupted in the different animal models of aCDI may be relevant.

According to these results, it seems likely that aCDI human treatments may benefit from compensatory treatments such as OT. Thus, both OT and desmopressin administration in aCDI patients appears to have positive effects on urine flow reduction, serum sodium concentration, and osmolality and to increase urine osmolality. However, animal experiments suggest that human CDI symptoms may be improved to a greater extent by the combined treatment of OT and desmopressin, even at lower doses.