Punching above their weight: how the smallest RNAs offer great promise for cancer biology

In recent decades, scientists have witnessed transformative developments in the field of RNA biology. RNA molecules are similar in composition to their more famous DNA counterparts (they are both nucleic acids), but are present in a variety of different forms, with each type carrying out its own distinct function. In the 1990s, an unusually small variety of RNA, entitled “MicroRNA” (or “miRNA”) was first identified, triggering an outpouring of interest among researchers. In the time since, miRNAs have been found to be so fundamentally imperative for the normal function of cells, from bacteria to plants to humans, it is astounding that their existence went unnoticed for so long. 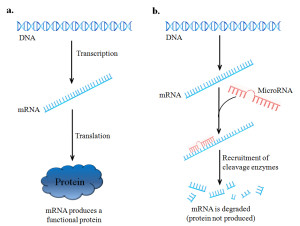 Fig. 1. MicroRNAs function by blocking mRNA translation into protein. Part a.) illustrates how a gene is normally expressed, first through transcription into mRNA, followed by translation into a protein, the functional product of the gene. In b.) the role of MicroRNA-mediated inhibition is shown. Following production of a mRNA, microRNA’s which specifically target the mRNA will bind to one end of the target molecule. The formation of this mRNA-miRNA complex will then recruit cellular machinery which will then degrade an mRNA before it can be translated into a protein.

Functionally, miRNAs work by regulating the ability of genes to achieve their end purpose: producing a functional protein. Mechanistically, they do this by binding to a target molecule called a messenger RNA (mRNA), which serves as the key intermediate between DNA and protein. Their ability to affiliate with an mRNA is governed by complementary base paring – a set of “universal rules” which govern the interactions of all nucleic acids – the very same rules that facilitate the annealing of two strands of DNA into the iconic double helix. The annealing of a miRNA to its target then recruits a host of cellular micromachinery which degrade the target mRNA. In this way, miRNAs allow a cell to “fine-tune” the expression of a gene by severing the vital link between gene and protein (the mRNA). Yet the part of this exquisitely intricate and sophisticated system that has captivated so many investigators is the consequence for a cell when it goes awry. Malfunctioning miRNAs have been linked in one way or another to virtually every disease, especially cancer. In the case of breast cancer, where high incidence and mortality constantly implores researchers to develop new and better treatments, miRNA research has found especially strong footing. True to its role as a repressor of gene expression, the source of miRNA’s role in cancer stems from an irregularly hyperactivity of certain miRNAs, wherein they inappropriately repress “anti-cancer genes” (which normally act to limit uncontrontrolled cell growth and metastasis– the hallmarks cancer). Alternatively, other “good” miRNAs which normally act to suppress malignant cell behavior have been found to be deficient in cancer cells, and in their absence, tumor growth and dissemination are allowed to proceed unchecked. While a disruption of the complex interplay between miRNAs and their targets can be a source of pathology, it also offers investigators a novel therapeutic opportunity; a lost miRNA could be re-introduced, and an overexpressed miRNA could be blocked. While these approaches have shown great promise in laboratory cell culture, the difficulty of devising a viable means of delivering miRNA-based therapeutics in animals (much less in humans) has stymied efforts thus far. Notwithstanding this limitation, there is also growing interest in utilizing miRNAs in an entirely different fashion – namely, as a disease “biomarker.” In this role, miRNAs collected from a tissue biopsy, or even from the blood, could be evaluated to enhance cancer diagnostics or monitor a patient’s response to treatment. Conceptually, this strategy has fewer practical hang-ups and thus is presently a more attainable goal for using miRNAs in cancer management. In summary, despite their only recent arrival to the scene in molecular genetics, miRNAs hold great promise for the future of medicine. Although several challenges persist, the ultimate translation of miRNA-based technology from the laboratory into the clinic looks increasingly like an inevitable outcome – and a welcomed one.