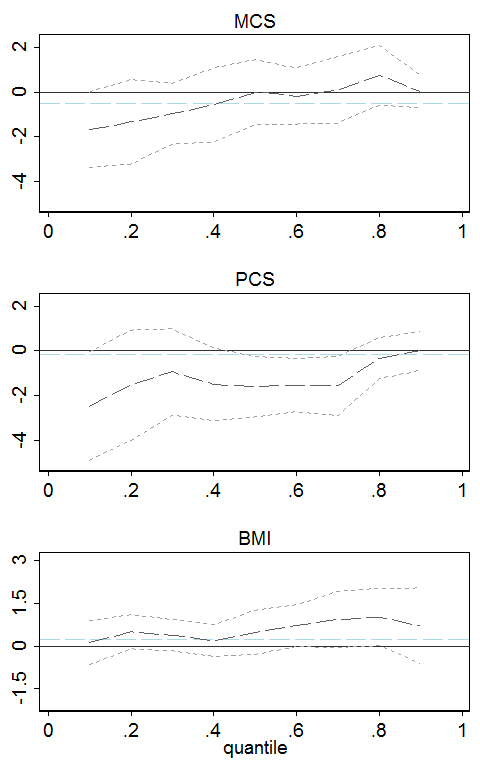 In order to rule out that the estimates are driven by a selection of people in poor health into job loss, we focus on job losses that are due to plant closures, since this is arguably a random shock that is unrelated to individual characteristics.

Our data come from the German Socio-Economic Panel (SOEP), a large and representative panel data set. We use three different health indicators: the Mental Component Summary Scale (MCS), the Physical Health Component Summary Scale (PCS) – both gathered from the SF-12 questionnaire – and the Body-Mass-Index (BMI). In epidemiological research, the SF-12 is commonly used to measure general health and functioning. Although MCS and PCS are both subjective measures of health, they have been shown to be correlated with actual health diagnoses. While one cannot directly infer from BMI on health, very high and very low values of the BMI are known to be associated with higher mortality. Adverse effects of job loss on physical health and BMI can be expected – if any – in the medium and longer run, while impairments of mental health should happen rather contemporaneously. We, thus, evaluate the effect of job loss on PCS and BMI two to three years after (potential) job loss, but the effect on MCS only zero to one year after.

The results presented in Figure 1 suggest that the effect of job loss indeed varies across the mental and physical health distribution and show that focusing purely on mean effects can be quite misleading. The estimates for the average effect of job loss – the blue dashed line – is always close to zero, indicating that there is no sizeable average health effect of job loss at all. In contrast, the quantile regression results strongly suggest that job loss impairs physical health for individuals in the middle and lower part of the health distribution, while those in best physical condition do not seem to be affected. The results for mental health, though less distinct, point in the same direction, indicating that only people in the lowest part of the mental health distribution suffer from job loss. The effects for BMI are rather small and never significantly different from zero. These results are not only relevant from a methodological point of view, but also important for policy. Policy makers who are interested in reducing individual and social costs of job loss and unemployment, should focus especially on people in poor health.