Most chemical reaction of industrial relevance are catalysed by different metals in their metallic state. However, after catalyst synthesis which involves calcination to adequately anchor those active metals unto the catalyst supports, the metals were oxidized, thus a reduction step using hydrogen treatment at elevated temperature to remove O2 inform of water vapour is required to reduce the metal oxides into their metallic states. One of the main challenge to this traditional protocol besides the high cost of hydrogen is the reconstruction of the catalyst surface under thermal treatment at elevated temperature which invariably affect the specific activity of the catalyst due to indiscriminate sintering of the active metals. 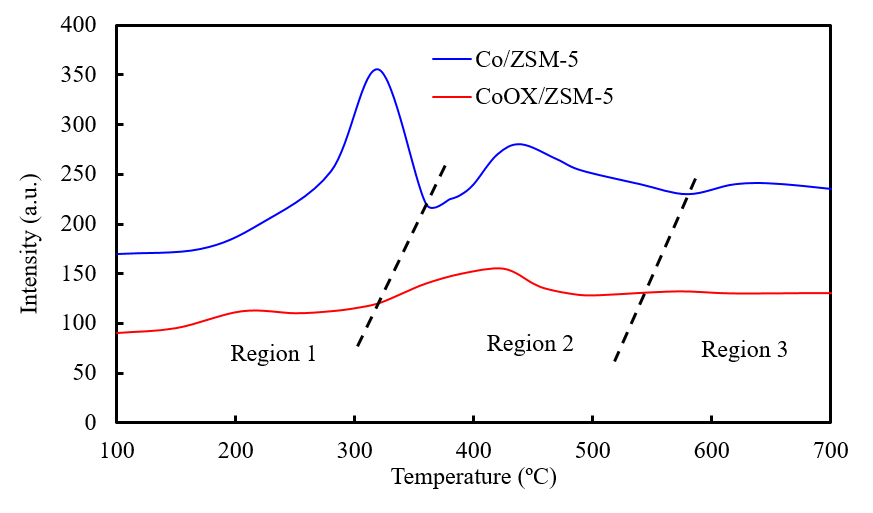 In this study, a novel protocol of synthesizing supported active metals in their metallic state in situ without necessarily undergoing reduction step was reported. In this account, the nitrate salt of cobalt was functionalized with oxalate ligand and the cobalt oxalate precursor was incorporated into protonic form of ZSM-5 as the catalyst support. The resulting slurry was filtered, dried and calcined under inert atmosphere to decompose the cobalt oxalate supported on ZSM-5 (CoOx/ZSM-5) into metallic cobalt on ZSM-5 and carbon dioxide (CoC2O4 → Co° + 2CO2).  The effectiveness of the method was validated via comparison of the H2 TPR of this CoOx/ZSM-5 with another conventionally synthesized cobalt oxide supported on ZSM-5 (Co/ZSM-5) without oxalate functionalization. Their H2 TPR profile in Figure 1 showed that while Co/ZSM-5 showed a conspicuous reduction peak at Region 1 which corresponds to reduction of Co3+ to Co2+ at a low temperature and the subsequent reduction of Co2+ to Coº at a high temperature, the CoOx/ZSM-5 showed nearly negligible reduction in Region 1 and marginal reduction in Region 2, which supports that the oxalate ligand functionalization (OxLF) was effective at guaranteeing synthesis of supported catalyst active metals in their metallic state. Furthermore, the OxLF was able to produce catalysts with narrow range very small cobalt nano particles sizes according to the TEM and FESEM images (shown in Figure 2) which is necessary to guarantee high reaction rate and product specificity. 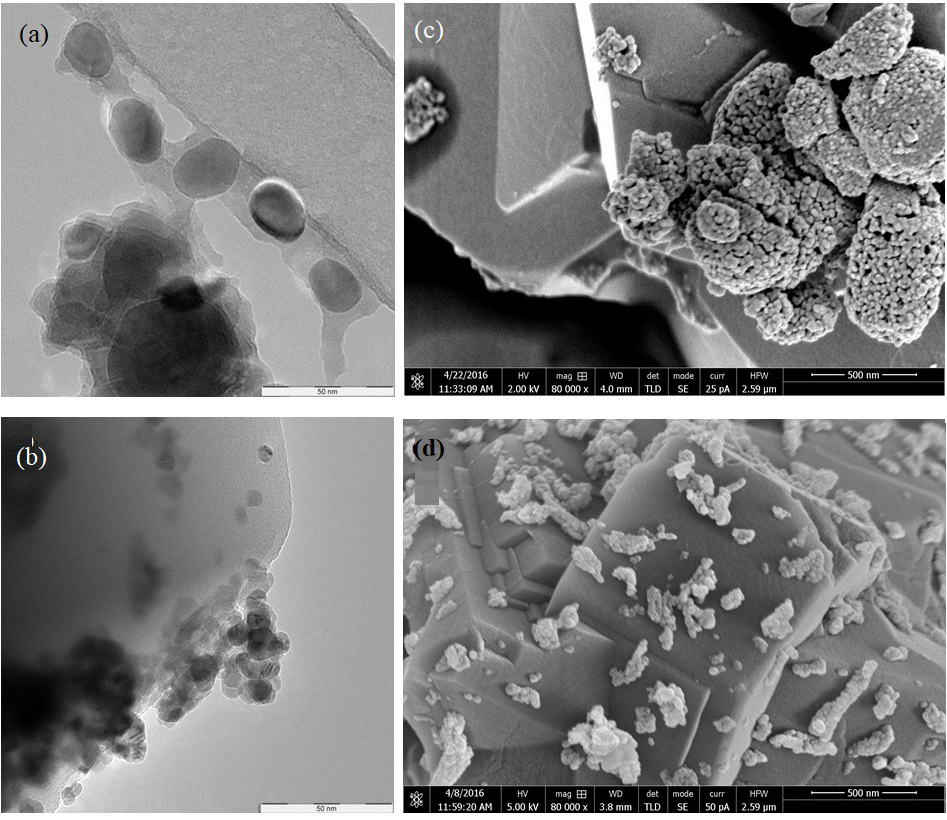 The activities of both Co/ZSM-5 and CoOx/ZSM-5 were evaluated in both Fischer-Tropsch Synthesis (FTS) and hyrdodeoxygenation (HDO) of oleic acid (OA) into paraffin biofuel. The Time-on-stream (TOS) evolution of CO conversion over Co/ZSM-5 and CoOx/ZSM-5 catalysts in FTS were 74.28% and 94.23% at 0.5 h TOS and their selectivity to C5+ HC production were 63.15% and 75.4%, respectively at reaction conditions of 240 °C, 2.0 MPa, H2/CO = 2, GHSV= 1000 h−1 at 0.3 g catalyst loading. Similarly, in the HDO process, the OA conversion were 59% and 92% over Co/ZSM-5 and CoOx/ZSM-5, respectively. In addition CoOx/ZSM-5 showed superior HDO and isomerization activities compared to Co/ZSM-5. Thus, the OxLF of Co is expedient.