Atrial Fibrillation (AF) is an abnormal heart rhythm which is associated with high risk of stroke, dementia, and death. AF is affecting approximately 1% of people around the world. Screening of AF for potential patients including all high-risk patients is important for early detection and prevention of AF. Since AF is often asymptomatic, in-office screening may not be always effective. Hence, opportunistic screening at home environment with a readily available and cost-effective device combined with an accurate, real-time, and automatic AF detection algorithm could be more effective for primary detection of this life threatening disease. Figure 1 shows a strategy for AF screening with automatic screening devices. 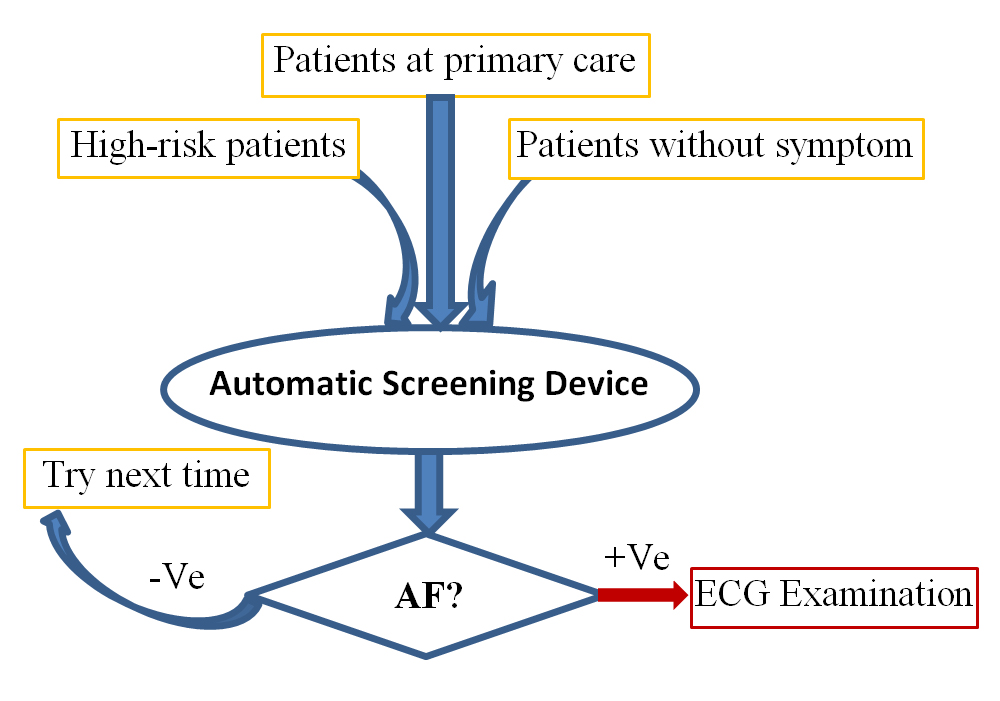 The main symptom of AF is highly irregular and often rapid heartbeats. Figure 2 shows two episodes of ECG signals where top one is normal heartbeat rhythm and bottom one is AF rhythm. Different technologies such as modified blood pressure monitor, single lead ECG-based finger-probe, and smart phone based plethysmogram signal can be used for detection of heartbeat duration (HBD). HBD during normal rhythm may also vary due to different physiological activities. Although it is expected that standard deviation of HBD during AF rhythm is higher but we observed that sometime the standard deviation for normal rhythms could be higher than that of AF rhythms. This is particularly true when the average HBD of AF rhythm is significantly lower than that of normal rhythm. Hence, we proposed a HBD normalization method based on rhythm estimation for better measurement of irregularity. Then irregularity of the normalized HBD was computed by a statistical method (known as entropy of distribution). We classified a window of heartbeats as AF or normal rhythm by thresholding the measured irregularity. The effect of this normalization was evaluated by comparing AF detection performances using HBD with the normalization and without normalization.

Sensitivity (ratio of detected AF heartbeats and all AF heartbeats) and specificity (ratio of detected normal heartbeats and all normal heartbeats) of AF detection using normalized HBD were tested using twenty-five ECG record of ten hour each obtained from twenty-five different patients. Detection accuracy was computed for equal rates of sensitivity and specificity. Using normalized HBD, we obtained 96.38% accuracy which is more than 4% improvement compared to AF detection without normalization.

The proposed normalization method was found useful for improving performance and robustness of AF detection. This method could be incorporated in existing screening device such as smart phone, automatic blood pressure monitor, or single lead ECG-based finger-probe. In general, the development and implementation of the rhythm-based normalization in an AF detection method seems important for developing a robust AF screening device.