2-in-1: A new strategy against Parkinson´s Disease

Parkinson´s disease is a neurological disorder, which affects around 6 mio people worldwide, a number being expected to double within the next 20 years. It is characterized by a progressive loss of neuronal cells in the brain and thus, termed a “neurodegenerative disorder”. Characteristically, a patient suffering from Parkinson´s disease appears paralyzed, showing deficiencies in initiating and stopping movements and shaking limbs in rest. While it is apart from hypotheses not precisely known why the neurons break down, we know that in the initial stage of the disease, the breakdown is focused on neurons which produce the substance dopamine. 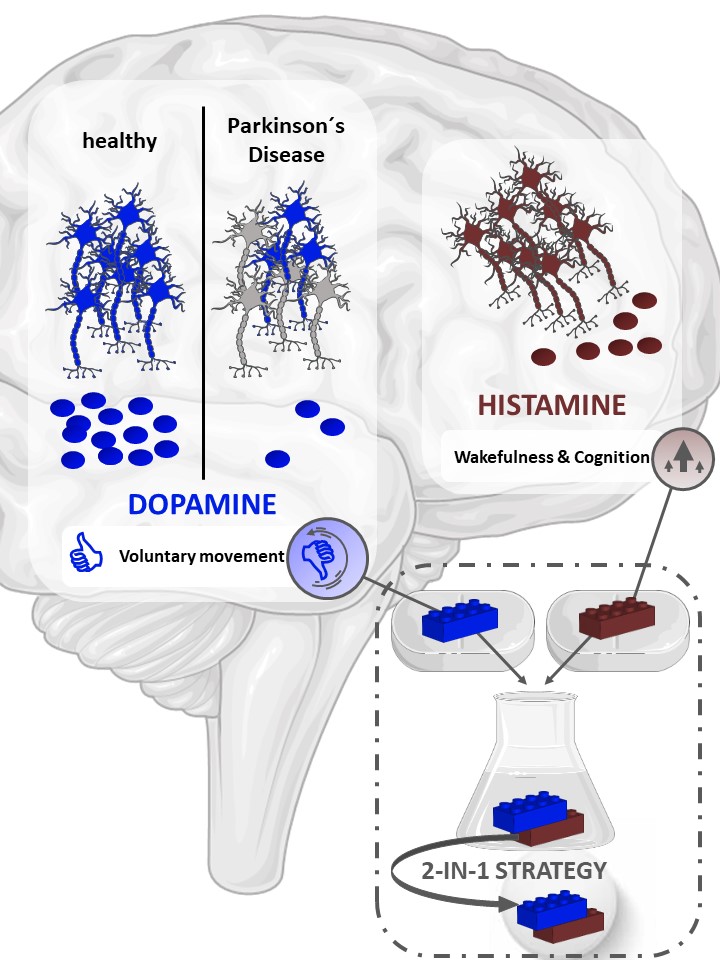 Dopamine is an important neurotransmitter which is responsible for delivering information between neurons. It is largely responsible for our feelings around motivation and reward, if we expect and receive something “good”. Apart from these central motivational processes, dopamine also regulates our intentional moving by being released from neurons in the midbrain. The loss of dopaminergic neurons in substantia nigra and other brain regions leads to insufficient innervations and disbalance states.

Antiparkinsonian strategies can be roughly subdivided in substitution of dopamine (or a precursor thereof, which is metabolized to dopamine), in drugs which mimic the actions of dopamine, or in inhibiting the natural breakdown of dopamine in the brain. One approved drug following the latter strategy is called “rasagiline”, which inhibits a specific enzymatic mechanism on dopamine inactivation (monoamine oxidase B). Thus, the released dopamine becomes longer active and the motor-symptoms of the disorder can be alleviated. However, this strategy does not alleviate additional symptoms, which appear and become more severe in a later stage of the disorder when also other neurons get lost. Such symptoms encompass sleepiness and decreased cognition.

This motivated us to create multitargeting drugs, which act like rasagiline but which also simultaneously influence other brain cells. Here, we used precognitive histamine H3 receptor antagonists, that block the presynaptic negative feedback mechanism. By the inhibition of the inhibition we received a remarkable stimulation leading to improved cognition and wakefulness in mice models. Importantly and in contrast to dopaminergic cells, histamine-releasing cells do not break down early in the progression of Parkinson´s disease. Therefore, it is a highly reasonable combination of drug profiles in one molecule. Accordingly, in contrast to the well-known and sedative anti-histamines, these drugs act pro-histaminergic.

In our study, we rationally built drugs which combine two mechanisms in one small molecule (2-in-1 design): Increasing the availability of dopamine to encounter the motor symptoms, but also increasing the release of histamine in the brain to increase cognition and wakefulness.

Why do we aim for a 2-in-1 drug but do not apply two drugs separately instead? Patients suffering from Parkinson´s Disease usually receive a potpourri of drugs. This multi-course-menu of medicines creates a high risk for the different drugs to compete with each other in the organism and for adding up their side-effects. Additionally, a less complex medication scheme is beneficial: It is preferred, to take one pill at a specific time and enjoy the remaining time of the day, rather than living a life around a complex medication scheme. In particular, in a disorder like Parkinson´s Disease which itself largely affects the quality of life.