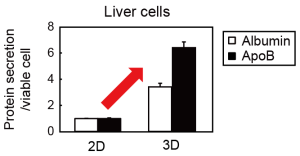 Increase of albumin and apoB secretion by 3D cultures

Assuming that culture environment may affect cell characteristics, we have tested the capacity of liver cells cultured under the 3D environment by using special plates supplied by Insphero (Switzerland). The plates enable various types of cells to grow in a single droplet and assemble according to gravity force. Consequently, we found that secretion of albumin and apolipoprotein B (apoB), both of which are produced in functional liver cells, as well as various gene expressions involved in essential liver function were increased in the 3D cultured cells. Indeed, it is widely known that cell functions as liver cells are diminished under the 2D environment shortly after they are isolated from living tissues, characterized by decreased albumin secretion.

Besides animal experiments, efficacy and safety of drugs or food ingredients are conventionally checked using cultured human cells before clinical use. We consider that our research paved the way for use of 3D cultured cells not only to precisely evaluate the effects of any compounds but also to discover what had been missed when using cells cultured under the 2D environment. For example, cell toxicity of some kind of drugs such as acetaminophen and tirapazamine can be higher in 3D cultured cells. The values of 3D cultures have been recognized in some field such as cancer and toxicological studies, and it is expected that adopting 3D cultures would lead to the development of novel drugs and therapies.

In summary, we showed that potential of liver cells can be improved by external change by shifting from the 2D to 3D environment. Recently, many global companies are making their efforts to develop technology involving 3D cultures, and we hope our findings would contribute to the promotion and prevalence of this intriguing technology.