A capillaroscopy based method to help prediction of Systemic Sclerosis onset

Systemic Sclerosis (SSc) is a rare systemic disease, characterized by immune system alterations and diffused microvascular disruption, followed by fibrosis of skin and internal organs, and Raynaud’s phenomenon (RP) is often the first clinical manifestation of the disease.

RP is caused by an abnormal microvascular response to temperature changes or emotional factors, characterized by skin colour changings most often localized in the body extremities. It often has three colour phases: blanching (white, due to initial vasoconstriction), followed by cyanosis (blue, due to reduced oxygen supply to tissues) and hyperemia (red, due to rapid reperfusion). Nevertheless, this phenomenon is also detected in other connective tissue diseases and in up to 5% of healthy people. In the last case it is called primary Raynaud’s phenomenon (PRP). Therefore, in daily clinical practice, it is important to find the earliest microvascular alterations that could help rheumatologists to distinguish among the large number of patients affected by RP, those at higher risk for development of SSc. 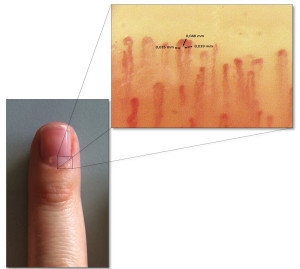 Fig. 1. 200x capillaroscopic image showing how we measured the largest dilations at apical, arterial and venous branches of the capillary loop.

Microvascular abnormalities are detected by nailfold videocapillaroscopy (NVC): a reliable, non-invasive and inexpensive technique constituted by a manegeable optical probe (video camera) that magnifies capillaries 200 times, connected to a software (personal computer) for storage of patients data and images. The NVC’s diagnostic and follow up potential in SSc, justified the introduction of capillaroscopic findings in 2013 classification criteria by the American College of Rheumatology (ACR) and European League Against Rheumatism (EULAR) with significant improvement on sensitivity/specificity and reliability of criteria (up 90%).

Previous studies showed how alterations in capillary diameters (i.e. capillaries larger than 20 μm) are common in PRP subjects and healthy people, while diameters larger than 50 μm in all their limbs (arterial, venous, and apical sections of each capillary) are typical for the “early” pattern of microangiopathy, one of the three specific SSc capillaroscopic patterns. We also previously observed how 16% of patients initially diagnosed as PRP could subsequently develop secondary RP ( SRP, mean associated with a disease like scleroderma).

In this retrospective case-control study we compared 6112 baseline (stored at the time of the first NVC performed) images of 191 patients affected by RP, of whom 143 PRP and 48 RP subjects later evolved to SSc-associated  SRP. In each capillaroscopic image the diameters of capillary most dilated limbs were measured and their average values were calculated.

We found that average diameters of the arterial and venous capillary branches were significantly larger in those patients that later developed SSc, while apical diameter showed no significant differences. This contrast may be due to distinct structure and pathogenic mechanisms for the apical region compared to other areas of capillary loop dilations. Arterial and venous microvascular dilations were found to be predictors for disease development, independently from other clinical characteristics (age, sex, RP duration, drug assumption, comorbidities). We also determined a threshold value (30 μm), observed at the capillaroscopic analysis, that could be used in future studies to differentiate patient at higher risk for disease development and in clinical practice to reassure patients who are probably not going to develop SSc (Fig. 1).

The study shows how the quantification of capillaroscopic microangiopathy parameters could add useful information for SSc early diagnosis and eventually to start early therapies reducing the risk of progressive organ involvement.