Multidrug resistance in Gram negatives is now recognized as an issue of worldwide interest. Those bacteria possess various resistance mechanisms compromising the efficacy of several class of antibiotics such as beta-lactams and aminoglycosides. Therefore, it is essential to develop effective tools such a screening culture medium to detect quickly the potential spread of aminoglycoside-resistant bacteria in human and animal isolates. This medium allows to perform prospective screening and epidemiological surveys to ensure the use of aminoglycosides.

The base of the medium is the Eosine-Methylene-Blue (EMB) agar, which allows the differentiation of lactose fermenters (black colonies) from most of the nonfermenters (colorless or light lavender) (Fig. 2). Vancomycin and amphotericin B were included to prevent the growth of Gram-positives bacteria and fungi, respectively. Given that 16S rRNA methylase producers are simultaneously resistant to amikacin and gentamicin, both antibiotics were incorporated in the medium to select specifically bacteria that are pandrug resistant to aminoglycoside.

Concerning the inoculum, a cutoff value was set at 103 CFU/ml. Indeed, a higher inoculum of a susceptible strain or of an isolate producing aminoglycoside-modifying enzymes could lead to the growth of few colonies. So, 100 µl of a bacterial suspension in normal saline are plated onto the SuperAminoglycoside medium. Then, the plate is incubated during 18 hours at 37°C. If no growth was observed, the incubation was extended up to 48 hours to confirm that no growth actually occurred. 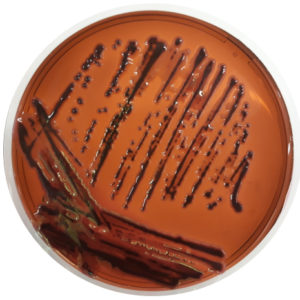 The sensitivity and specificity of the SuperAminoglycoside medium for selecting amikacin- and gentamicin resistant isolates producing 16S rRNA methylases were 95% (19/20) and 96% (47/49), respectively. When considering detection of amikacin- and gentamicin-resistant isolates only (regardless of production of 16S rRNA methylases), the specificity of the medium was 100%.

The SuperAminoglycoside medium contributes to species identification according to the color of the colonies growing on the medium (Fig. 2). It allows to rapidly identify isolates producing plasmid-mediated 16S rRNA methylases which enables to implement quickly infection control measures to restrict the spread of resistance-plasmid.