Alzheimer’s disease is a neurodegenerative disease that has been studied extensively over the last four decades. Millions of people worldwide are affected by this disease, and because our population is growing older, this disease is becoming alarmingly more prevalent. One factor thought to promote the advancement of Alzheimer’s disease is the aggregation of tau protein into neurotoxic oligomers and neurofibrillary tangles. Although tau aggregation has been correlated with progression of Alzheimer’s disease, there is still no effective treatment for preventing tau aggregation. It is known that a handful of small-molecule compounds may inhibit fibril formation. Among these compounds is a molecular tweezer known as CLR01. The research presented here highlights the application of mass spectrometry (MS) to characterizing the molecular interaction between CLR01 and tau protein to provide insight into the mechanism by which CLR01 inhibits tau aggregation and may curb the effects of Alzheimer’s disease. 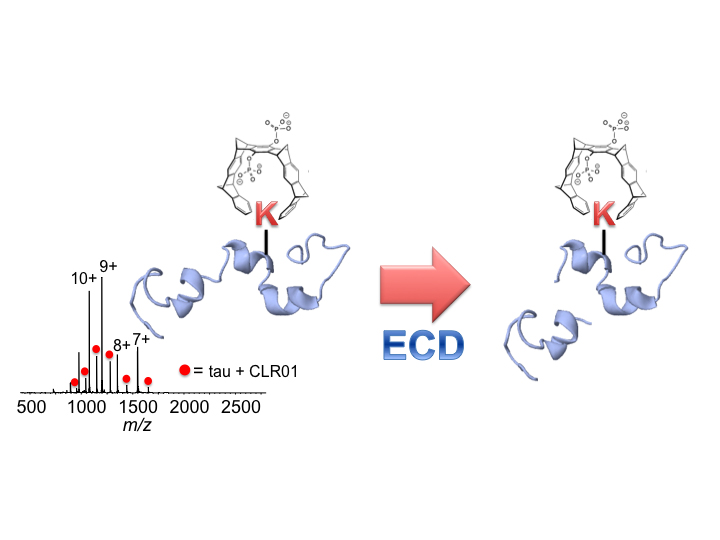 Native mass spectrometry has proven to be a useful technique for detecting the noncovalent binding of proteins to other biomolecules, cofactors, and drug molecules. Using electrospray ionization (ESI), interactions between proteins and weakly bound ligands can be preserved during the ionization process. Coupled with electron capture dissociation (ECD), native top-down MS can determine the sites of weakly bound ligands to a protein. Further, ion mobility (IM) MS can be utilized to gain structural information on protein and protein complexes by separating proteins by their collisional cross section (CCS). These techniques were used to characterize the interaction between tau and CLR01.

Tau/CLR01 complexes were analyzed to determine the affinity, location, and structural implications of CLR01 binding. An ESI-MS spectrum of a mutant tau/CLR01 solution at a 1:1 molar ratio revealed a distribution corresponding to the apo form of the mutant tau and a smaller distribution corresponding to mutant tau bound to CLR01. The relative intensities of these two forms indicated that CLR01 bound this form of tau with a Kd in the low micromolar range. Native top-down MS of the mutant tau/CLR01 complex yielded protein fragments with some fragments still containing the CLR01 molecule. Analysis of the ECD fragmentation spectrum indicated that CLR01 bound to the microtubule-binding region of tau, which is known to be an aggregation prone region. IM-MS of the 7+ charge state of tau and the tau/CLR01 complex showed an increased relative abundance of the early arriving peak. When two CLR01 molecules bound to tau, an even greater increase in the early arriving peak was observed. This increase in the intensity of the early arriving peaks suggested that CLR01 binding induced formation of compact conformations of tau monomers.

The data we obtained provide new mechanistic insight into the way CLR01 interacts with tau and inhibits its self-assembly. It is possible that CLR01 binds to the aggregation prone region of tau just enough to compact the tau structure and shield this region from interacting with other tau monomers. This effect would decrease the probability for tau to self-assemble into oligomers and aggregates. This interaction between CLR01 and tau illustrates a promising step forward in the development of aggregation-inhibiting compounds in the race to cure neurodegenerative diseases.