A messenger and its disciples: Spreading stress messages in plant through Ca2+-CBL-CIPK network

The early life forms appeared on earth as entities that were covered by cellular membranes. These entities had a major problem from one of the abundant elements present in the earth- Calcium (Ca2+). Higher level of Ca2+ is cytotoxic to cell because it can precipitate phosphate and hence severely affect energy homeostasis. Therefore, it was essential to extrude the excess of Ca2+ from cytosol in the primitive cell. The mechanism that developed to maintain a homeostasis (by keeping extremely low levels of Ca2+ i.e., approx. 100nM in the cytosol) in the cell marked the beginning of Ca2+ signaling. 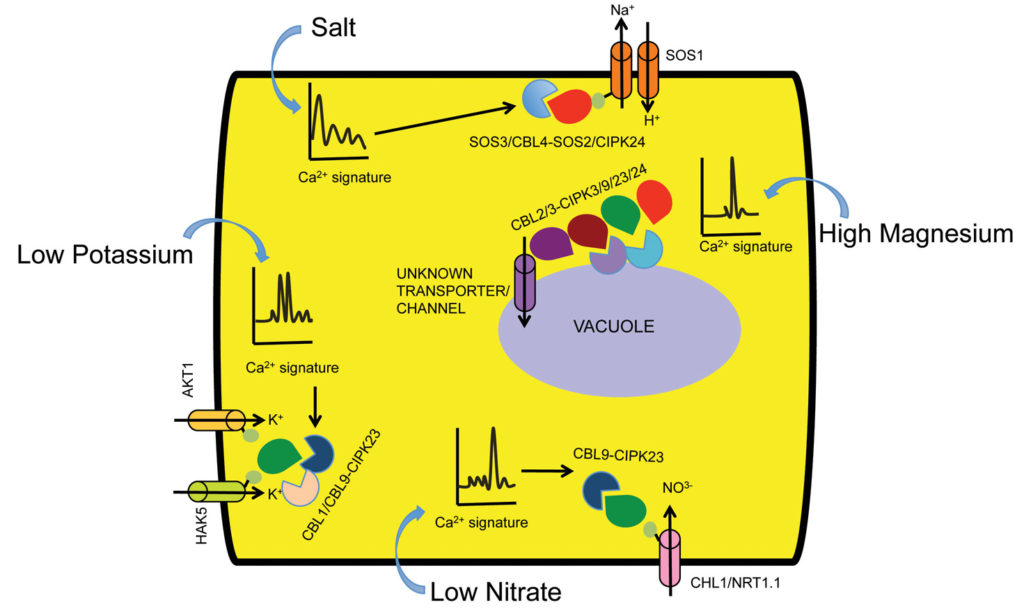 Fig. 1. The major Ca2+ signaling pathways modulated by CBL-CIPK network. High salt mediated cytosolic Ca2+ rise activates SOS3 (CBL4) that target SOS2 (CIPK24) to the plasma membrane where it phosphorylates SOS1 (Na+/H+ antiporter resulting in the extrusion of Na+ from cell. In the case of low K+, the plant cell generates a dfferent Ca2+ signature to activate the CBL1/CBL9-CIPK23 patway, which aids in K+ uptake by phosphorylation of AKT1 and HAK5 channels. In response to low nitrate, the plant cell activates the CBL9-CIPK23 module to phosphorylate and activate the NRT1.1 channel leading to nitrate uptake in cell. High Mg2+ in the vicinity of plants triggers CBL2/CBL3 in combination of CIPK3/CIPK9/CIPK23/CIPK24 to activate an unknown transporter/channel at the vacuolar membrane that quarantines the excess Mg2+ from the cytosol allowing the plants to survive.

Ca2+ signaling today is one of the most complicated signaling mechanisms extensively studied in both animals and plants. The signal originates from the change in Ca2+ concentration in the cytoplasm and raising it to higher levels and the termination of the signal occurs by removal of the “excess” Ca2+ from the cytoplasm. This phenomenon of Ca2+ rise and fall (a Ca2+ signature) is a rapid event and thus needs very efficient molecules that can sense the changes during this short timeframe and pass on the encrypted message in the signature. In this regard the Ca2+ sensors and responder play a major role, which decrypt the messages encoded in Ca2+ signature. There are different proteins to act as sensors such as calmodulin (CaMs) and there are proteins to act as responders, CaM activated kinases (CaMK). There is a unique family of proteins that can play dual role of a sensor and responder i.e., Ca2+ dependent protein kinases (CDPKs).

In contrary to the kinases in animal and fungi, there is a group of phosphatase known as calcineurin that also participates in propagating the Ca2+ signal. While searching for a similar molecule in plants, researchers ended up with a module that had two components. A calcium sensor with EF-hands and subsequently termed calcineurin B-like (CBL) and a responder kinase that is activated by CBL binding termed as CBL-interacting protein kinase (CIPK). The CBLs are majorly composed of EF-hands and can interact with CIPK after binding to Ca2+. The CIPKs are Ser/Thr kinases that have similar catalytic kinase domain with other kinases of the CAMK family. The basic build is simple with presence of ATP binding pocket and activation segment that mainly controls the activity of the kinase. There are two extra motifs present in a typical CIPK after the kinase domain, NAF/FISL where CBL bind and activates the CIPK and PPI motif where phosphatases bind and inactivates the kinase. The CBL-CIPK module is targeted to different cellular locations depending on the signal sequence present in the particular CBL. The CIPKs majorly employ phosphorylation to control the activity of their targets. But prior to phosphorylating their targets, they phosphorylate the interacting CBLs to strengthen the interaction of a particular CBL-CIPK module, which also enhances the activity of the kinase.

The salt overly sensitive (SOS) pathway utilizes Ca2+ cues generated during salt stress to activate a SOS1 channel at the membrane by the SOS3/CBL4-SOS2/CIPK24 module. The same module is controlled by Gigantea (GI) protein which is responsible for flowering in plants. During low potassium (K+) stress the CBL1/CBL9-CIPK23 module activates High Affinity K+ Transporter 5 (HAK5) and Arabidopsis K+ Transporter 1 (AKT1) for K+ uptake. Similarly the CBL9-CIPK23 module is also active in the nitrate uptake pathway by modulating Nitrate Transporter 1.1 ( NRT1.1) transceptor. The CBL2/CBL3 along with a quatret of four CIPKs (CIPK3/9/23/24) forms a complex module, which regulates an unknown target probably at the vacuolar membrane (tonoplast) to confer high magnesium (Mg2+) tolerance to plants (Fig. 1). Besides, these the tomato CBL10-CIPK6 module modulate Respiratory Burst Oxidase Homolog B (RboHB) to protect plants against Pto/AVRPto mediated cell death. The CBL2/CBL3 together with CIPK12 enable growth of pollen tubes highlight the involvement of the module in plant development.