A mild form of dermatomyositis as a prodromal sign of lung cancer: looking behind the skin

Dermatomyositis is a rare inflammatory disease characterized by specific skin findings and inflammatory lesions in the muscle biopsy. The most common clinical signs of dermatomyositis include an erythema over the face, neck and upper trunk known as “neckline V sign” and slightly elevated erythematous papules located on the fingers, called “Gottron’s papules” which are found in 60 to 80 % of patients. Nail changes (such as capillary telangiectasia along the distal nailfold, periungual erythema, hyperkeratosis) are common. A purple-red discoloration of the upper eyelids with or without associated eyelid edema may be present. Photosensitivity and pruritus are rather rare. The muscle symptoms consist of mild to severe weakness of the proximal muscles, followed by pain in 1/3 of cases. These patients have difficulties raising their arms or climbing stairs. Muscle cramps and diffuse unexplained fatigue may be present as well. Dysphagia, weight loss or dyspnea may appear over time and are usually signs of disease progression or underlying malignancy. The clinical presentation and severity can among the patients. 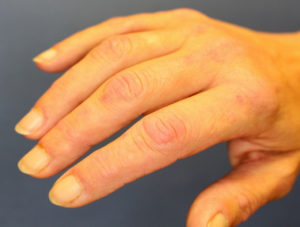 Fig. 1. Erythematous papules over the metacarpophalangeal and proximal interphalangeal joints (Gottron’s papules), such as nail changes (periungual erythema and hyperkeratosis along the distal nailfolds) on both hands of our patient.

The exact cause of dermatomyositis isn’t known. It is an autoimmune disease which means that the body’s antibodies attack healthy cells. Viral infections or cancer have been supposed to play a role as trigger factors for dermatomyositis. An association with malignancy has been shown is around 20% of the cases. Most common associated malignancies include breast, ovarian, lung and colon cancer. It is remarkable that dermatomyositis can appear not only after but also prior to the diagnosis of cancers. It is also important that the severity of dermatomyositis cannot predict or indicate an underlying cancer, as in our case.

Here we report a case of a 43-year-old woman who referred to our hospital by her physician for suspected contact dermatitis since she described mild itching sensations in her arms and legs as her major symptom. A physical examination revealed erythematous papules over her fingers together with mild nail changes (periungual redness, hyperkeratosis and capillary telangiectasia along the distal nailfolds) on both of her hands (Fig. 1). It is remarkable that the patient herself had not even mentioned these mild changes. A thorough examination of her medical history, however, revealed more symptoms. Pain and weakness in the muscles of her proximal extremities and neck flexor muscles led to difficulty in raising her arms, combing her hair and climbing stairs. At the same time she experienced swallowing difficulties especially of solid nutrition and reported an uncharacteristic weight loss of 10 kg in the last 3 months. The results of laboratory tests showed increased values of serum creatine kinase and myoglobin. An electromyogram, a skin biopsy and a muscle biopsy confirmed the diagnosis of dermatomyositis. 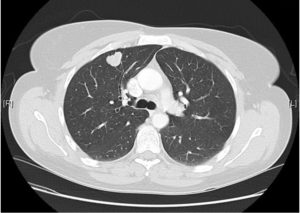 As we are aware that dermatomyositis may be associated with malignancy we performed a thorough tumor screening examination. A computed tomography (CT) of her chest revealed a pulmonary nodule in her right upper pulmonary field (Fig. 2). A histological examination of the lung biopsy showed an adenocarcinoma of moderate differentiation which is a rather rare type of lung cancer. Other lymph or organ metastases have been excluded.

Our patient was diagnosed with paraneoplastic dermatomyositis as the first sign of a lung adenocarcinoma. After the diagnosis she underwent a right upper lobectomy. In the postoperative period, she presented a considerable improvement of her skin lesions, muscle weakness and swallowing difficulties which have been completely disappeared aftervone month.

This case report highlights the importance of a thorough clinical examination and search for underlying malignancy in patients with dermatomyositis. Even if dermatomyositis has a mild appearance or a discrete skin manifestation as in our case, may be the first sign of a tumor disease. As patients with a tumor and dermatomyositis may have a worse prognosis and quality of life, early diagnosis and treatment of this paraneoplastic disease is highly important. An early recognition and awareness of this entity is not only important for a prompt diagnosis of the tumor but also for a better prognosis and quality of life for these patients.

A mild form of dermatomyositis as a prodromal sign of lung adenocarcinoma: a case report.
Papakonstantinou E, Kapp A, Raap U
J Med Case Rep. 2016 Feb 6