Whether from external environmental factors or spontaneous intracellular processes, the DNA in our cells is under constant bombardment by DNA damage. Because unrepaired DNA damage can cause cell death, our cells have evolved vital mechanisms to repair DNA to help preserve genome integrity and cell survival.

Chemotherapy is a successful cancer treatment because it overwhelms cells with DNA damage that is especially lethal to tumor cells. Unfortunately, cancer cells can fight back with DNA repair mechanisms that counteract chemotherapy. To introduce a potential new tool in the cancer-fighting tool belt, we created an antibody that can impair the central DNA repair protein, Rad51. 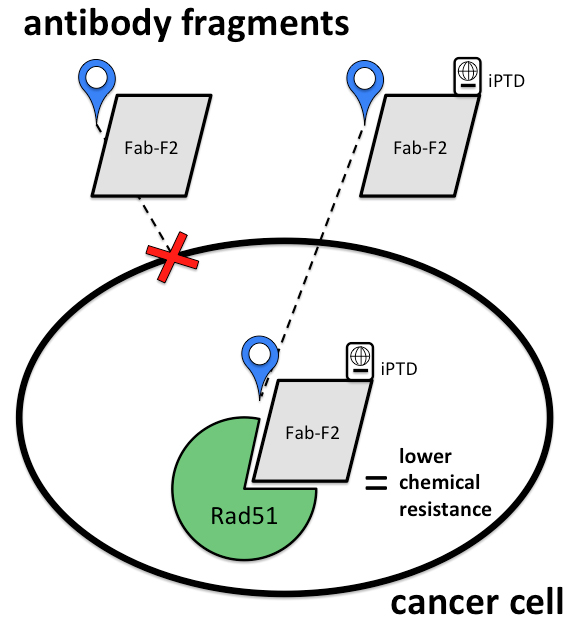 Fig. 1. The iPTD molecular passport enables the Fab-F2 antibody fragment to travel inside living cells to bind the Rad51 target and reduce the cell’s ability to repair chemical DNA damage.

Antibodies are naturally produced by the immune system in order to specifically recognize and neutralize foreign invaders, such as viruses and bacteria. In the pharmaceutical world, therapeutic antibodies are commonly used to specifically bind and turn off (i.e. inhibit) certain targets on the surface of our cells. Using antibodies to turn off targets inside our cells, such as Rad51, has been mostly off-limits because the large size of antibodies and antibody fragments prevents their entry. We hypothesized that we could overcome this problem by fusing our antibody to a novel cell import tag, called iPTD, which would act as a molecular passport to enable entry into living cells.

In the first part of our study we created a novel Rad51-specific antibody fragment.  Instead of using animals, we used a test-tube approach where a synthetic antibody “immune system” is contained within bacteria-infecting viruses, called phage. Using phage-display technology, which garnered the Nobel Prize in Chemistry in 2018, we were able to fish-out a single phage clone (from over 10 billion!) that carries the genetic information for a Rad51-binding antibody fragment. This information was then used to produce and purify the antibody protein, which we named Fab-F2, and determined that Fab-F2 has favorable binding properties to the Rad51 target. Furthermore, we showed that Fab-F2 inhibited one of Rad51’s important enzyme activities, single-stranded DNA binding. This was significant because it suggested that Fab-F2 might turn off Rad51 DNA repair function inside the cell… if it could travel there.

Since we used a test-tube approach to create Fab-F2, we were able to easily re-engineer the antibody fragment to include a permanent fusion to the novel iPTD cell import tag. We then confirmed that Fab-F2-iPTD retained significant binding to Rad51. Next, we labeled the antibodies with fluorescence and observed by microscopy and fluorescent measurements that Fab-F2-iPTD, but not Fab-F2, was able to effectively enter living cells. In the final and most exciting experiment, we grew human cells in a tissue culture dish and treated them with a chemical known to induce DNA damage. To our delight we found that the Fab-F2-iPTD antibody fragment, but not Fab-F2, significantly enhanced the cell-killing ability of the DNA damage treatment.

Taken together, we created a novel Rad51-inhibiting antibody fragment called Fab-F2. When fused to the cell import tag iPTD, Fab-F2-iPTD entered living cells and enhanced the cell killing by a DNA damage agent similar to those used to treat cancer. Beyond this study, the iPTD cell import tag may open a world of previously unavailable intracellular targets for other antibody fragments and proteins that cannot enter living cells on their own.