Type 2 diabetes mellitus (T2DM) which accounts for more than 95% of all diabetes cases is a heterogeneous, multifactorial disorder typified by hyperglycemia with gradual decline in insulin action (insulin resistance), followed by the inability of beta (β)-cells to compensate for insulin resistance (pancreatic β-cell dysfunction). Subsequently in due course, T2DM often brings about severe complications of macrovascular and microvascular origin. This alarming scenario has fostered research into the development of novel pharmacologic agents for the treatment of T2DM, as well as evaluation of the safety and efficacy of old as well as new anti-diabetic medication. 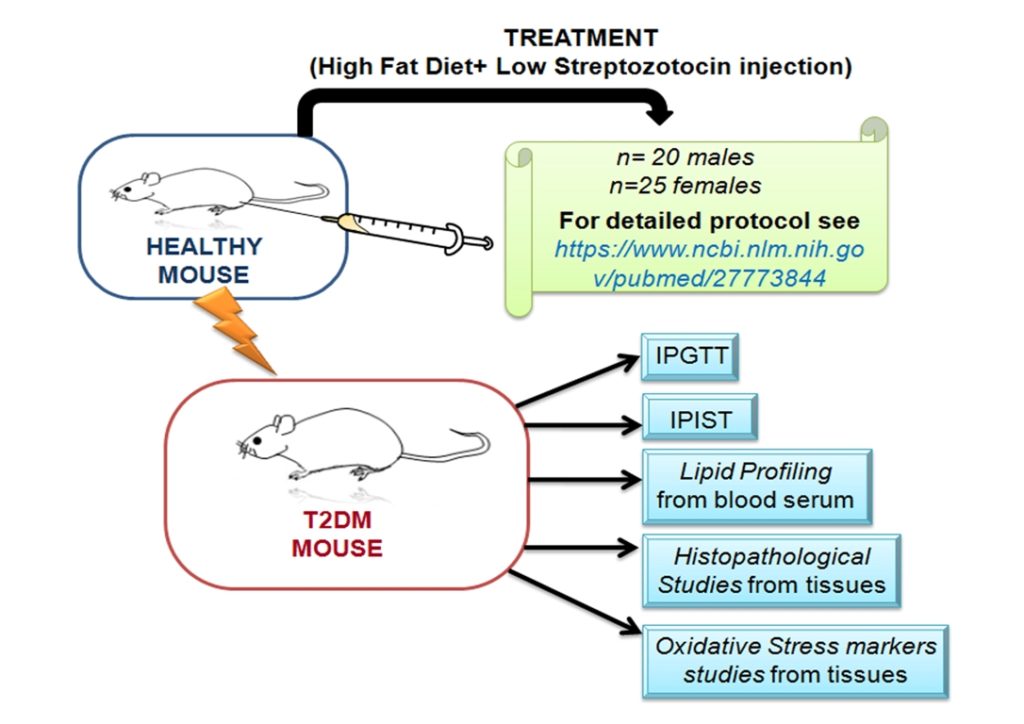 Animal models mimicking human T2DM are pivotal for the biological screening of anti-diabetic drugs, and several approaches have been used to develop such models. These include genetic manipulation such as the ob/ob mouse, db/db mouse, Zucker fa/fa rat etc and various treatment regimens with one or more chemicals such as alloxan, streptozotocin etc. Regardless of such animal models, available for T2DM, most of them fail to successfully simulate the characteristics of human type 2 diabetes mellitus (T2DM), are not easily available and tend to be expensive.

Our model differs from previous T2DM murine models in several aspects. Firstly, successful induction of T2DM in both male and female Swiss albino mice of LACA strain were reported in our model, unlike most previous studies which have used only male mice. Secondly, our model depicts various alterations in oxidative stress parameters as well as histological observations in tissues which closely resemble those reported in human T2DM patients. Finally, our study for the first time compares the efficacy of the DPP-4 inhibitor vildagliptin and the biguanide metformin, in ameliorating T2DM in both male and female mice on the basis of the parameters of glucose metabolism, lipid profile and biochemical markers of oxidative stress. Our model is thus stable, inexpensive to develop, mimics the characteristic metabolic features of human T2DM, and is suitable for anti-diabetic drug screening.