Our skin turns brown when exposed to the sun, and our hair is black, brown, red or blond when we are young. All of these colours and browning processes are due to a polymer, melanin, the synthesis of which is started by the enzyme tyrosinase. Melanin protects our skin and DNA from UV-light; moreover, it is used by invertebrates for wound healing and defense of pathogens through encapsulation. On the other hand, tyrosinase is also responsible for unwanted effects such as black spots on plants, fruits, fungi, crabs and other food products, causing a large economical loss. 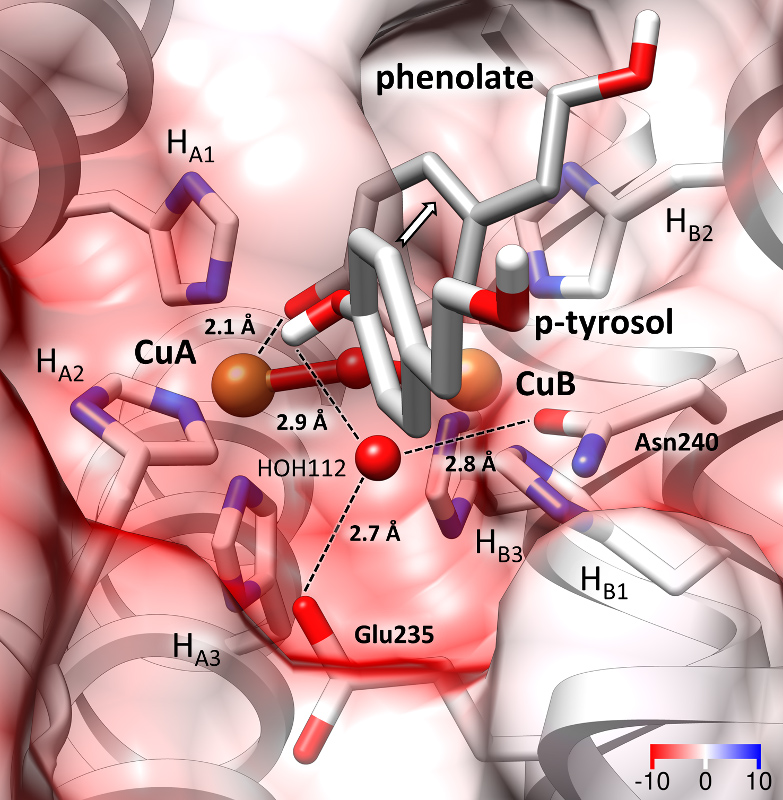 View into the binding and catalytic pocket of the refined tyrosinase structure (PDB-ID 2P3X*) from wine leaves after replacing Gly240 by Asn240. The monophenols p-tyrosol delivers the proton to the conserved water (HOH112) being coordinated by Glu235 and Asn240. The resulting phenolate slights to the CuA (arrow) to bind and start the reaction cycle. (copper atoms, orange)

Tyrosinase and the related enzyme catecholoxidase are found in almost all organisms. To apply the function of these enzymes in physiology, medicine, cosmetics and ecology the corresponding molecular mechanisms have to be understood. Tyrosinases catalyze the conversion of monophenols like the amino acid tyrosine to highly reactive quinones by using a molecule of oxygen from the air which is bound as peroxide between two copper ions. This requires a highly sophisticated chemistry, in contrast to the related catecholoxidases which also produce reactive quinones, but through simple two-electron oxidation of diphenols like L-DOPA. The molecular origin of the two different reactivities has been unclear, although this question has been in the focus of chemical, biological and medical research for many decades. The problem is that monophenols like the natural amino acid tyrosine can only be bound by the copper ions as a monophenolate when the hydroxyl group is deprotonated. But how does this happen and where is the proton accepted? A hint how this might happen was recently given by Dr. Fishman and colleagues from Israel: possibly a conserved water molecule within the protein matrix is involved.

Heinz Decker and Even Solem, Johannes Gutenberg University, Mainz, Germany, and Felix Tuczek, Albrechts University, Kiel, Germany, have found experimental evidence for this hypothesis and related it to the molecular mechanism of the catalysis. The team used a recombinant catecholoxidase from Riesling wine leaves which only oxidizes o-diphenols to the o-quinones. Replacement of a glycine by arginine the enzyme led to a mutant that shows tyrosinase activity.

All catecholoxidases have a conserved amino acid glutamate close to the active site which binds a water molecule. Additional interaction with the artifically introduced asparagine (replacing a glycine) polarizes the conserved water molecule within the enzyme so strongly that it withdraws a proton from the monophenol approaching the active site and binds it as a hydronium ion. The resulting monophenolate binds to the CuA ion of the dinuclear active site. Subsequently an electrophilic attack of the peroxide bound between the two copper ions occurs, causing a hydroxylation in ortho-position. Thereby a proton is released from the aromatic ring which, together with the other oxygen atom of bound peroxide and the proton derived from the hydronium ion generates a water molecule. The bound diphenolate is released as highly reactive quinone which spontaneously polymerizes to melanine. At the end of the cycle the dicopper center is present in the deoxy form which is able to bind dioxygen and substrate again, starting a new turnover.

Thus, a key step of the synthesis of melanine catalyzed by tyrosinases is understood. In the future this will allow to optimize activation, inhibition, modification and biotechnological application of these enzymes in medicine, cosmetics, food industry and ecology.