Breast Cancer is the second leading cause of mortality in women in the United States. Breast cancer arise in the ducts of the mammary glands that produces milk in a lactating breast. Breast cancers usually express various proteins called hormone receptors for hormones like estrogen and progesterone. Some breast cancer cells also express a protein called Her2. Not all breast cancers express all the receptors and breast cancers can be divided into subcategories based on the expression of receptors. This is important for diagnosis as well as treatment as the receptors can be targeted with drugs as part of the treatment. However, certain breast cancer type do not express any of the previously mentioned receptors. This type of cancer is called Triple-negative breast cancer (TNBC). The treatment for TNBCs is mostly dependent on standard chemotherapy. TNBC is also the most aggressive type of breast cancer as well. Thus TNCB type cancer can metastasize to other organs of the body, which results in death of the patients. Hence, there is urgency in developing new or novel therapeutic strategies for treatment of TNBC. 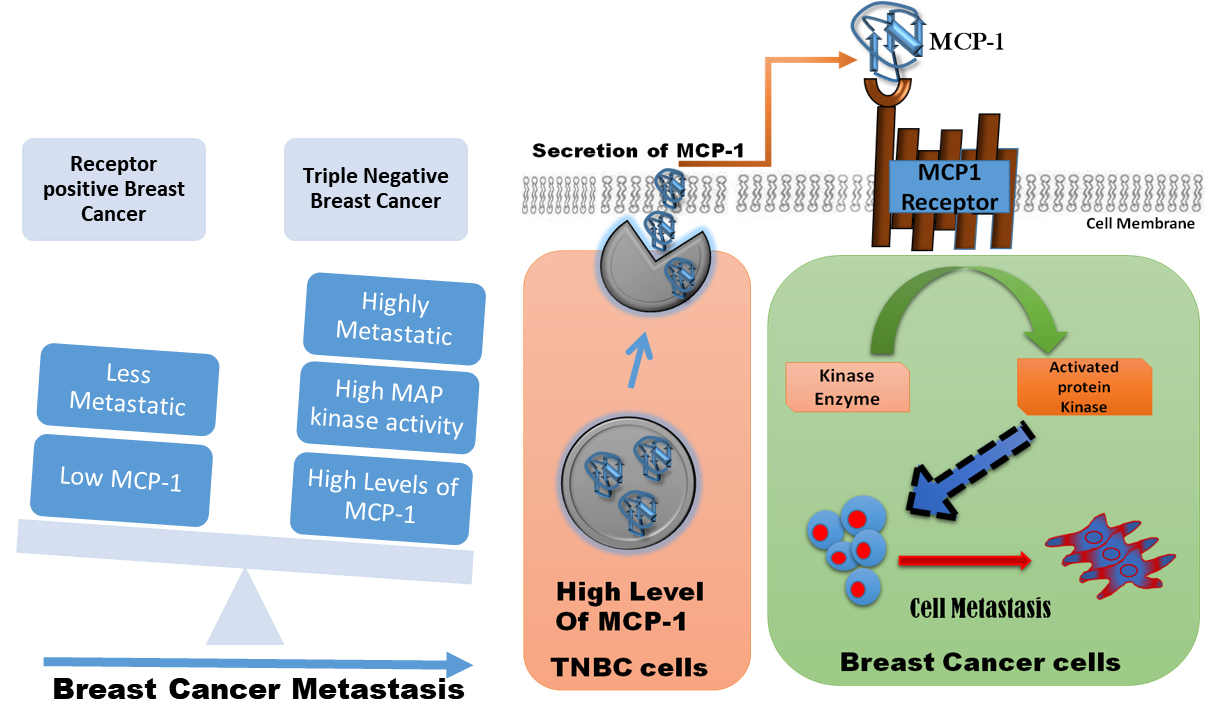 There is also significant amount of health disparity in breast cancer. Breast cancer incidence rates among women are comparable between European American and African Americans. However, the mortality rate among African-American patients are higher. Along with that, TNBC also affects African American women disproportionately at a younger age. However, the biological factors underscoring this disparity is still elusive.

Our study shows that a small secreted protein called Monocyte Chemoattractant Protein-1 (MCP-1) is a marker associated with TNBC and may play a key role in TNBC disease progression. We measure secreted MCP-1 by quantifying protein and also with mRNA levels which were determined by Real-time PCR in multiple breast cancer cell lines. The cell lines represents various breast cancer subtypes based on Estrogen, Progesterone or Her2 receptor protein expression. Our data show that MCP-1 is upregulated in TNBC cell lines both transcriptionally as well as in secreted protein levels compared to ER-positive luminal cell line, MCF-7. Breast cancer patients, with highly aggressive Basal or Claudin-low subtypes, also showed higher expression of MCP-1. We showed that treatment with MCP-1 induced cell invasion in various breast cancer cell types, without affecting cell proliferation. Small molecule inhibitor against Chemokine Receptor 2 (CCR2), the receptor for MCP-1 as well as inhibitor for an enzyme called MAP kinase negatively affected MCP-1 induced MCF-7 cell invasion. This suggests that MCP-1-CCR2 axis may regulate invasiveness via the MAP Kinase pathway. Knocking down MCP-1 decreased cell invasion in TNBC cell line, along with downregulation of key epithelial to mesenchymal transition markers which are important for cellular oncogenesis. Our study suggests that MCP-1 mediated pathways could be potential therapeutic targets for the treatment of TNBC and could reduce cancer health disparities.