A new chance for rapamycin

Rapamycin is a bacterially-produced drug first discovered in the soil of Easter Island, and currently used as an immunosuppressant for organ transplantation and the treatment of certain types of cancer. Rapamycin has received popular attention following the 2009 discovery that it could extend the lifespan of mice, and subsequent work has shown it may have promise for the treatment of many age-associated diseases. However, the side effects of rapamycin in humans include an increased risk of infection and metabolic abnormalities including an increased risk of diabetes. These may substantially limit the usefulness of rapamycin as a therapy for diseases of aging. 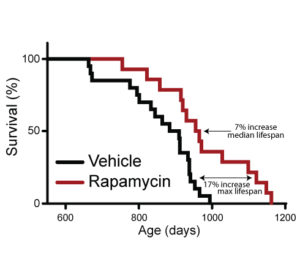 At the molecular level, rapamycin inhibits the activity of an enzyme called mechanistic Target of Rapamycin (mTOR). We and others have found that rapamycin interferes with two different protein complexes containing the mTOR enzyme. Inhibition of one of these complexes by rapamycin promotes lifespan, while inhibition of second complex, called mTORC2, is associated with many of the negative side effects of rapamycin.

As discussed in detail in a new review article (Arriola Apelo and Lamming, 2016), these results suggest that intermittent dosing regimens could be a translatable strategy for the safer use of rapamycin to promote healthy aging.