Neurons are the excitable cells responsible for processing and transmitting information in the nervous system. A neuron typically extends a long thin axon to transmit information to target cells and several shorter dendrites that receive input from other cells through specialized connections known as synapses. The majority of excitatory synapses in the central nervous system exist on small bulbous structures on dendrites known as dendritic spines. The dendrites of a single neuron can contain hundreds to thousands of spines. During learning, new spines will appear. At same time, some other spines and synapses will be removed. As such, dendritic spines can be called as “memory-units” or “stuff that memories are made off”. Through adding or removing, strengthening or weakening these units, brain modulates its function. By re-organizing synaptic pathways, new skills are stored to brain. 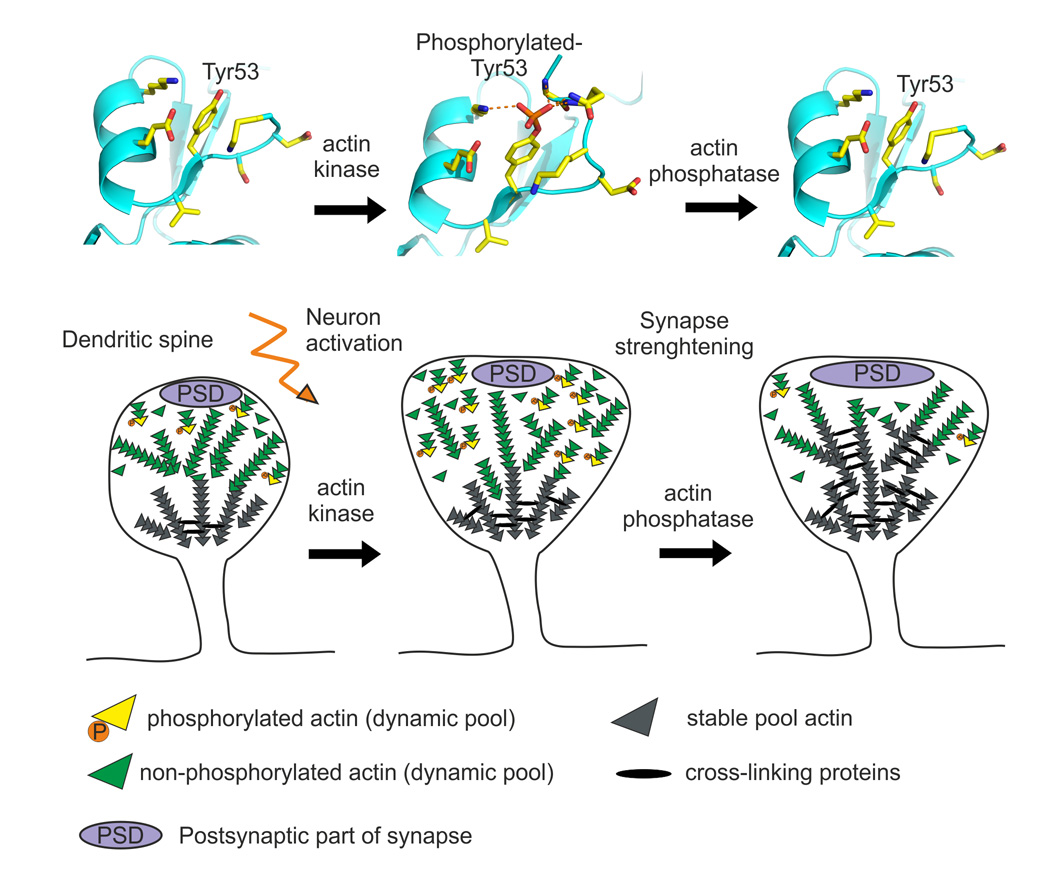 Fig. 1. The phosphoryl-group is added to amino acid tyrosine (Tyr) number 53. When the synapse of neuron is activated, actin is phosphorylated, which facilitates the re-organization of the dendritic spine actin cytoskeleton. When changes are stabilized, for example during learning, the phosphoryl-groups are removed from actin.

Until recent years, it was thought that regulation of actin structures is mainly non-covalent, driven by actin binding proteins.  But actin regulation turned out to be more complex than assumed. Recent years have shown examples of covalent post-translational regulation of actin. This means that chemical groups are covalently added to amino acid residues of actin. These chemical groups then change the properties of actin filaments. One of the most frequently used chemical groups in cellular signaling is the phosphoryl-group (proteins are phosphorylated). Phosphorylation of actin is an extremely fast way to break down the actin filaments but until the spring 2016, actin phosphorylation was known as a special regulatory mechanism found in slime molds.

Yet, by spring 2016, it was demonstrated that actin phosphorylation is not just a peculiar regulation mechanism found in slime molds, but it is important also for the actin regulation in mammalian neurons. Furthermore, actin phosphorylation plays an important role in stimulus-induced re-construction of the dendritic spine actin cytoskeleton. The discovery of mammalian actin phosphorylation is important as this will help us to understand the molecular basis of learning, how cells can change and store structural changes rapidly, in few minutes. The similar regulation of actin in slime mold and rat is not that surprising as actin is one of the most conserved proteins in evolution and the regulatory mechanisms of actin cytoskeleton are in general very similar from slime mold to humans. In the future, it will be important to test whether actin is phosphorylated only in neuronal cells or whether actin phosphorylation is more generally employed regulatory mechanism in mammalian cells. If actin is specifically phosphorylated only in neurons, this process could provide a novel treatment target for neurological diseases, as only neurons would be affected.