With the aging population of the United States increasing every year, there is an increasing need to develop new therapeutic modalities to provide for healthful aging. Although longevity is generally considered positively in most families, and of course premature death in the young is always a tragedy, sometimes longevity, per se, is not that pleasant. This is because longevity is often accompanied by debilitating diseases. In fact, many of the aging population wonder whether remaining alive in pain and discomfort is superior to death. Accordingly, devising strategies to provide for healthful aging becomes increasingly important. 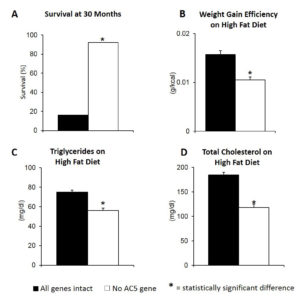 Fig. 1. Deletion of Adenyly Cyclase Type 5 (AC5) gene increased longevity by one third (A), reduced body weight despite greater food intake on high fat diet for 100 days (B). Blood levels of triglycerides (C) and total cholesterol (D) were also reduced in the absence of the gene after 100 days on high fat diet.

We altered the genes in a mouse, where the gene for one of the many isoforms of adenylyl cyclase, i.e., type 5, was deleted from its genome. This turned out to be a model of healthful aging. First of all, they live a third longer than their normal counterparts, who still have the gene intact. More importantly removing this gene protects against many of the diseases and disabilities of aging. Notably, they are protected from cancer and heart disease, two major causes of death and disability. They are also protected against obesity and diabetes, factors that are becoming of increasing importance in the population that not only limit lifespan, but also limit healthful lifespan. It is well recognized that obesity is a major factor in many diseases, most importantly for heart disease and cancer. Importantly, deleting the adenylyl cyclase type 5 gene increases longevity by one third, improves the appetite and food intake significantly, while at the same time reduces body weight through reduction in fat mass, not muscle or bone, and also reduces blood levels of triglycerides and cholesterol, which are closely related to heart disease (Fig. 1). Another limitation in the aging population is the ability to exercise, yet it is well recognized that regular exercise regimens protect against heart disease, cancer, obesity and diabetes and also prolong lifespan. This is another beneficial feature of deleting the adenylyl cyclase type 5 gene, as without this gene baseline exercise performance is as good as that which develops with chronic exercise training, which also improves exercise performance, in their normal counterparts, who have the gene intact.

At this point it is appropriate to ask; if there was a pill that prolongs your lifespan, protects against heart disease and cancer, increases exercise capacity and allows you to eat more, but reduce your weight and blood levels of bad cholesterol and triglycerides, would you take this pill? For us the answer is yes. Accordingly, we have been interested in developing a drug that might mimic the salutary features of deleting the adenylyl cyclase type 5 gene, since deleting a gene in patients is not very feasible or practical. Serendipitously, we found an anti-viral drug, which is approved for patients by the Federal Drug Administration, known as Vidaribine or Ara-Ade, which has features of inhibiting adenylyl cyclase type 5. Our initial studies, just recently published, demonstrated that this drug, like deletion of the gene, protects against heart disease and appears to work by the same mechanism. However, there are limitations to using Vidaribine (Ara-Ade) chronically in patients, since it has some toxicity and also can only be administered intravenously. For this drug to be useful in patients, it will require the ability to be taken orally and also be extremely safe, since this type of drug will have to be taken over a lifespan. Accordingly, a major goal for our research will be to modify the chemical structure of Vidaribine (Ara-Ade), so that it can be taken orally and have minimal side effects.