Natural Killer (NK) cells are immune cells that are found in the blood and protect the body by killing infected and cancerous cells. NK cells can also be found in large numbers in some organs, including the liver. These NK cells are different from those found in the blood in that they are not very good at killing dangerous cells. What they do is not yet clear. Recent work in mice has shown that some of the NK cells in the liver cannot leave it: they are “resident”. We wanted to find out if humans also have liver-resident NK cells. 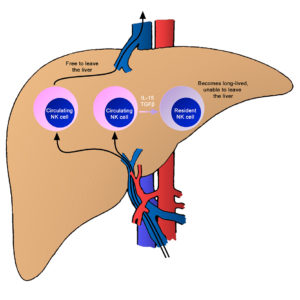 In the past, doctors and scientists have often looked at NK cells in the blood and assumed that these were representative of NK cells throughout the body. Our finding that human liver contains a large group of resident NK cells means that this assumption is mistaken, in the liver at least, and probably also in other organs. The existence of these cells may also have implications in liver transplantation. It could suggest that treatments aimed at immune cells should be focused on the donor liver before transplantation, instead of or as well as the patient, in order to target liver-resident immune cells.