Fluorine, which is represented by symbol F, is the most electronegative element (fluorine 4.0 vs. carbon 2.6, nitrogen 3.4, and oxygen 3.4): this means that fluorine strongly withdraws electrons from neighboring atoms. The introduction of fluorine or atomic groups containing fluorine such as a CF3 group can dramatically improve effects of medicines because of their stereoelectronic effects. It is said that about 25% of all medicines contain fluorine. So, the creation of novel fluorine-containing molecules and the development of efficient production methods for fluorinated medicines have been increasingly important nowadays. Nevertheless, existing methods to produce fluorine-containing molecules are time-consuming and/or expensive. Thus, there is plenty of room for improvement of the synthesis of medicinally important molecules containing fluorine. 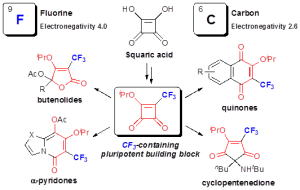 Our study provides a novel and highly versatile route to diverse carbo- and heterocyclic molecules containing a CF3 group from a single starting material. To realize this strategy, we came up with an idea that a four-carbon cyclic compound bearing a CF3 group can function as a pluripotent building block for various CF3-containing cyclic molecules. This is because four-carbon cyclic molecules have unfavorable ring strain, and thus, they can be transformed to less distorted five- or six-membered cyclic molecules with relief of ring strain as the driving force. To this aim, we used squaric acid, which literally has a square shape, as a precursor for the designed CF3-containing building block. The CF3 group was successfully introduced to an ester of squaric acid in two steps in a single flask using a relatively inexpensive and commercially available silicon-based trifluoromethylating reagent, (CH3)3SiCF3, known as Ruppert-Prakash reagent. 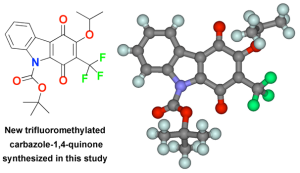 The obtained CF3-containing squaric acid derivative was then transformed to various quinones because 1,4-benzoquinone motifs are found in many biologically important molecules such as ubiquinone, vitamin K, antibiotic and anticancer agents. Using our method, various CF3-containing polycyclic quinones, which are hitherto unknown and difficult to synthesize, were obtained efficiently in short steps including thermal ring expansion and aerobic oxidation. Furthermore, our building block could be efficiently transformed to interesting heterocyclic compounds such as butenolides and bicyclic a-pyridones or a five-carbon cyclic compound, aminocyclopentenedione.

Our method can also be applied to the synthesis of other types of CF3-containing functional molecules and is potentially able to be extended to different squaric acid derivatives, which possess fluorine-containing groups other than the CF3 group. Studies along these lines are currently underway in our laboratory.