The Nitrates Directive of the European Union (91/676/EEC) aims to reduce and prevent water pollution caused by nitrates from agricultural sources. It establishes that water resources should be considered polluted when nitrate concentration exceeds 50 mg L-1. The Directive requires the Member States to designate Nitrate Vulnerable Zones (NVZ), which are areas that drain into waters polluted or at risk of pollution by nitrates. In NVZ, farmers must follow mandatory measures within action programmes that include limiting N-fertilization and animal manure application to prevent nitrate leaching and runoff.

One of the difficulties in implementing the European environmental policies for nitrate pollution control is the lack of a common standard criterion for NVZ designation, which in turn may limit the success of action programmes in poorly defined NVZ. Index-based groundwater vulnerability mapping has proven to be a useful tool to assist governments in establishing policies related to the planning of water resource management over the last few decades. There are still, however, research gaps in assessment techniques and scientific considerations behind the inclusion/exclusion of parameters and their relative weights and ratings. In addition, most methods for mapping groundwater vulnerability are based on the excessively simplistic idea that aquifer recharge is only produced by vertical infiltration. The Land Use-Intrinsic Vulnerability (LU-IV) procedure for assessing groundwater vulnerability to nitrate pollution and delimiting NVZ was recently developed to address the above-stated challenges. 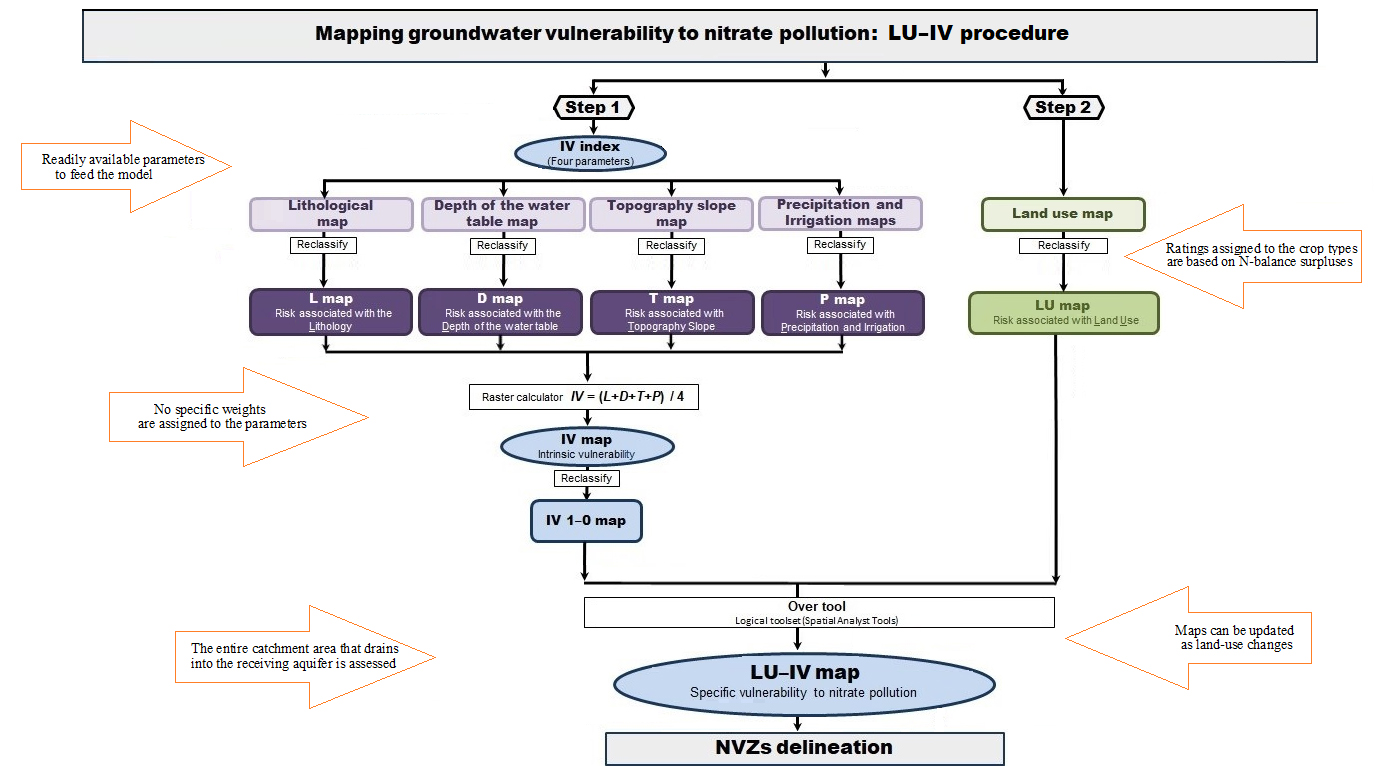 The LU-IV procedure (Fig. 1) combines a map of intrinsic vulnerability (IV map) and a map of the risk of N-loss associated with land use (LU map) by applying the Logical Math tools in ArcGIS to generate the map of vulnerability to nitrate pollution (LU-IV map). This methodology has the following distinctive characteristics: (1) it uses readily available parameters to feed the model, (2) it does not assign specific weights to the parameters, (3) it allows assessing the entire catchment area that drains into the aquifer, considering the solute transport through the aquifer catchment area, and (4) it permits periodical map updating as land-use changes over time.

The specific objective of this research was to conduct an empirical assessment of the risks of N-loss to groundwater associated with land use (LU) based on annual reports on the N-balance surplus in Spanish agriculture. These data were used to generate a detailed risk rating system reflecting the potential risks of N-loss by crop types. The new LU ratings were used to assess the specific vulnerability of groundwater to nitrate pollution by using the LU-IV procedure (Fig. 1). This fine-tuned model was compared with four other models for groundwater vulnerability assessment in which the LU ratings had not been empirically adjusted.

The study area to test the models included the catchment areas of 12 alluvial aquifers associated to tributaries of the River Ebro (Spain). Most of them were chronically polluted by nitrate, with only a few remaining unaffected by pollution. The potential NVZ were extracted from all the models for comparison with the map of groundwater nitrate content. Results confirmed that the LU-IV procedure using LU ratings from N-surpluses in crops was the best risk predictor of groundwater areas polluted by nitrate. These results support the high level of reliability of the LU-IV procedure for delimiting NVZ when applying the LU ratings obtained empirically from the N-surpluses.