A new strategy against cancer cells. Targeting the Rho-GTPases interactions: The case of the new compound 1A116

For the last decades scientist have been working hard to find cancer´s Achilles heel to design and develop more specific and efficacious therapeutic strategies for cancer. It has become clear that altered cell signaling is a key determinant underlying cancer progression. Interestingly, several signaling pathways have been reported to be dysregulated in cancer cells including the Rho GTPase family of proteins. 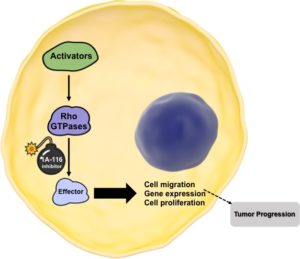 The Rho GTPases are small monomeric G proteins that act as molecular switches cycling between an inactive GDP-bound and an active GTP-bound state. Rho proteins are highly regulated and three types of proteins are in charge of its regulation: (a) GEFs: activators of Rho GTPases. (b) GAPs: activate the GTPase activity, leading to the inactive state (c): GDP-dissociation inhibitors. The Rho GTPases are master regulators of actin cytoskeleton rearrangements and cell morphology. In addition to their cytoskeletal effects, Rho GTPases regulate several signal transduction pathways that lead to alterations in gene expression affecting several transcription factors. Rho GTPases are also able to modulate different enzymatic activities.

As mentioned, the Rho GTPases through a series of complex biochemical networks control some of the most fundamental processes of the cell. It is not surprising that mutations or alterations of this complex signaling system could lead to the development of cancer. In fact, overactivation of Rho GTPase pathways has been associated with malignant transformation and tumor progression. Even though Rho GTPase pathways alteration were reported in several cancer types, Rho GTPases hyperactivation has shown to be particularly important in breast cancer, glioblastoma, prostate cancer, lung cancer, melanoma, among others.

The substantial body of evidence that relates Rho GTPases with cancer has made them attractive and validated therapeutic targets at the molecular level. With an incredible level of complexity and as more knowledge was being incorporated to the true nature of Rho GTPases, there has  been an increasing interest in designing novel therapeutic agents targeting these proteins and therefore negatively influence tumor cell growth and progression.

Several strategies have been explored including inhibition of Rho-nucleotide interactions, inhibition of downstream effectors and modulating Rho GTPase-spatial distribution. Interestingly, a class of protein-protein interaction inhibitors has also been developed, targeting Rho-GTPases interaction with their activators. Of this class of inhibitors, one interesting compound is 1A116 a novel therapeutic agent developed by our group showing strong in vitro and in vivo data regarding its antitumor capacity.

It has already been shown the key role of Rho GTPases in transformed cell behavior and targeting these proteins represent a very interesting therapeutic opportunity. More preclinical data is still needed to define the therapeutic value of these inhibitors. So far, encouraging results show the great potential to develop novel cancer therapeutics using Rho GTPases as molecular targets.