Sometimes a broken bone fail to heal (“nonunion”) and it is necessary to induce the formation of new bone tissue to connect the broken pieces.

Investigators from the Instituto Venezolano de Investigaciones Cientificas (IVIC) and orthopedic surgeons from the Hospital Universitario de Caracas have developed a new treatment for these complicated bone fractures. Their method makes use of the ability of mesenchymal stem cells, isolated from the bone marrow, to induce the formation of new bone.  Their method utilizes stem cells isolated from patient’s own bone marrow, thus there is no rejection. 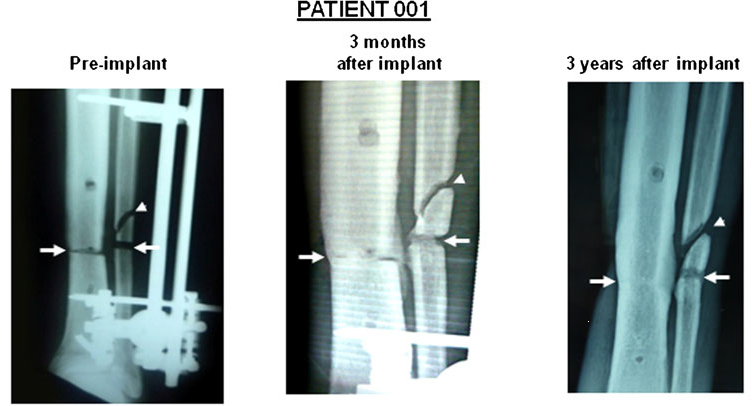 In cell cultures in the laboratory, mesenchymal stem cells, are isolated from the patient own bone marrow,  multiplied to many millions and differentiated, in specific cell cultures, partly into bone forming cells (“osteogenic progenitors”) and partly into blood vessels  forming cells (“endothelial progenitor”). An important step for this work was the finding that these cells could grow in cell cultures adherent to the surface of microspheres of collagen, allowing their use as carriers for the stem cells.

For the treatment of the patients with nonunion, many millions of collagen microspheres, laden with adherent osteogenic and endothelial progenitor stem cells, are prepared in the laboratory and brought to the operating room. To make easier the placement of the stem cells in the nonunion gap fracture, when the patient is already prepared to receive the transplant, the stem cells, were included in clots made from the patient’s own blood plasma rich platelet. Then, the clots, containing the collagen microspheres laden with stem cells, were placed in the fracture gap and covered with a collagen matrix to keep them in place.

Initially, three patients with a long history of impaired fracture healing were treated. In all patients, after three months post transplantation of the stem cells, there was evidence of formation of new bone in the site of nonunion and complete healing of the nonunion after a year.