Alzheimer’s disease (AD) is by far the most common cause of dementia affecting more than 35 million people worldwide. AD is characterized by memory loss, dramatic impairment of cognitive skills, and progressive body and mind decline ultimately leading to death. Despite the profusion of intensive scientific efforts, effective pharmacotherapeutic options for the prevention and the treatment of AD are still lacking. In the controversial literature about AD, a predominant idea refers to the crucial role of Amyloid-β peptides (Aβ) in the pathogenesis of the disease. In fact, the common histopathological marker in the brain of AD patients is the presence of extracellular plaques mainly composed of Aβ. Aβ is physiologically produced and it is not toxic in the monomeric form. 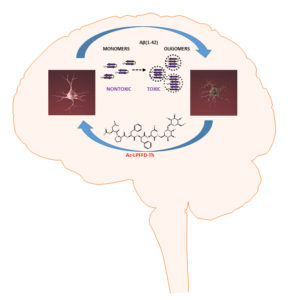 Under certain conditions, Aβ may self-aggregate into multiple forms, ranging from dimers to oligomers and fibrils. Fibrils are responsible for the formation of plaques in AD brains. Among Aβ aggregates, soluble oligomers are considered as the most toxic forms to neurons. In fact, the presence of Aβ oligomers correlates better with dementia than the deposition of insoluble fibrils. The notion that soluble Aβ oligomers are key toxic agents, suggests that molecules able to prevent the basic molecular recognition underlying their formation, would be valuable candidates for the treatment and the prevention of AD. The critical region involved in amyloid fibril formation has been mapped within the hydrophobic core at the residues 16-20 of Aβ. Designed peptides based on this self-recognition motif bind to the homologous sequence of Aβ thereby preventing its self-association. Despite the good in vitro activity found for some of these compounds, they tends to self-aggregate and to be included into amyloid fibril, an occurrence that limits their therapeutic usefulness. Therefore, modified synthetic peptides, based on the sequence of this central region of Aβ, was considered in this work. We have synthetized a new trehalose-conjugated peptide of the well-known b-sheet breaker peptide, LPFFD. The trehalose (Th), has been chosen due to its antifibrillogenic and neuroprotective properties reported in the literature. In such kind of molecules it is hopefully expected a synergic action of both the glucidic and peptidic moieties. Moreover, trehalose conjugation may facilitate the transport of these peptides across the blood-brain barrier. Our previous experiments demonstrate that trehalose conjugation renders this peptide derivative more resistant to enzyme degradation in the biological environment. In this paper by using different technical approaches, we show that the AcLPFFD-Th molecule specifically interacts with the central region of Aβ, interfering with the self-assembly process. In fact, we observe that in presence of Ac-LPFFD-Th, Aβ does not form large amyloid aggregate and, e most importantly; the formation of the toxic soluble oligomers is strongly reduced. This ability accounts for the observed neuroprotection against the toxic insult induced by Aβ aggregation in primary cortical neurons. Furthermore, we have shown that the trehalose-conjugated peptide is more efficient than a mixture of the unconjugated peptide LPFFD and trehalose, suggesting that the conjugation synergistically increase the neuroprotective features of both the peptide and the trehalose moieties. Overall, our results suggest that hampering Aβ self-aggregation at the early stages, may constitute a valuable and effective tool to keep benign monomeric Aβ out from the formation of toxic oligomers. This would eventually provide protection against the neurodegeneration associated to the disease progression in AD.