A novel measure for predicting OSA whilst awake

Obstructive sleep apnea (OSA) is a common sleep disorder, and its prevalence increases significantly with age. Despite being massively under-diagnosed, the latest estimation of OSA prevalence is >1 billion globally. OSA diagnosis is based on an overnight polysomnography (PSG) assessment that is expensive and requires technical skills. Nowadays, there are many portable PSG devices recording fewer biological signals that can be lent to individuals for the night study that can aid the OSA diagnosis. However, for recommending a treatment especially for severely affected individuals (apneic), still an overnight PSG assessment in a sleep lab is required. 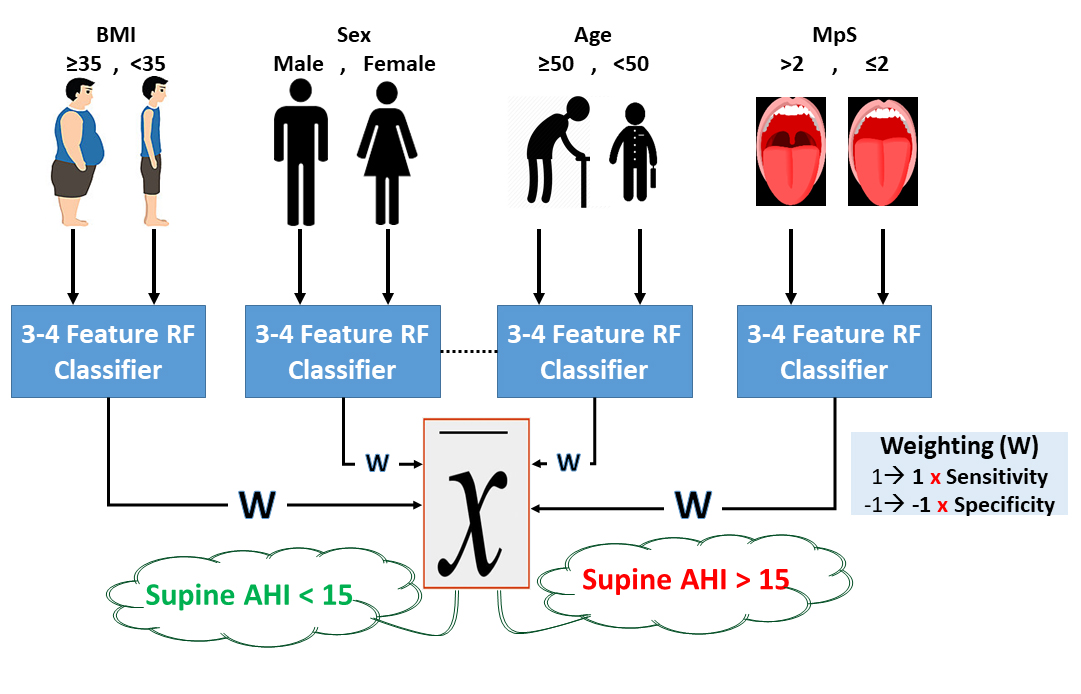 Accurate OSA diagnosis and treatment is very important. OSA is associated with several other diseases; also, every year there are accidents due to apneic drivers falling asleep that not only cost over billions of dollars annually but also cost lives. Aside from the high cost and laborious nature of the PSG assessment, even its portable one is not available in rural areas. In addition, there is another urgent need for accurate and quick OSA screening e.g., for patients who require general anesthesia for a surgery as OSA can cause complications during recovery and anesthesiologists must be prepared for it in advance.

For the above reasons, a quick and accurate screening of OSA is of great interest. As a pioneer in utilizing tracheal breathing sounds for OSA diagnosis, we aimed to develop a technology capable of predicting OSA by analyzing a few breathing sound cycles recorded whilst the patient is awake (during wakefulness). Our rationale has been that imaging studies have shown OSA individuals OSA have an altered (narrower and more collapsible) upper airway. Since breathing sounds are generated due to airflow turbulence inside the upper airways, we hypothesize that breathing sounds, even during wakefulness, are representative of the airway pathology such as OSA. This goal has been ambitious because even those who are severely apneic do not show any obvious respiratory symptom while awake; for example, they can exercise with no problem; this is because their upper airway dilator muscle compensates for their narrower and more collapsible airway. However, this increased activity of the dilator muscle cannot be measured non-invasively. To appreciate the challenge, one should also note that the OSA population is very heterogenous; the cause of OSA for every individual can be different due to several different risk factors. For example, while we know that obesity and smoking are two of the major risk factors, not every severe apneic person is obese or smoker.

We have been investigating different approaches for breathing sounds analysis to screen individuals for OSA while they are awake. Our latest algorithm, called AWakeOSA, that has shown a high accuracy (~90%) for predicting OSA during wakefulness, is in fact a series of classifiers that treats each breathing sounds’ spectral and bispectral features as a symptom and assigns a classifying vote. A higher decision-making algorithm then assigns a weight to each vote depending on the confidence of that classifier on its outcome, and gets the average vote of all classifiers. Furthermore, to address the heterogeneity of the population with OSA, we designed a classifier for every confounding variable (age, gender, weight, etc.) that impacts the breathing sounds; for example, we designed one classifier that predicts OSA using some sound features in two groups of obese and non-obese; another for two groups of young and old, etc. The Figure shows the overall AWakeOSA algorithm schematically.  The robust and high unbiased accuracy of our algorithm provides a for fast and efficient screening for OSA; more importantly, the algorithm can be adjusted for increasing its sensitivity or specificity depending on the application.