Human tissues contain tissue fluid. This fluid originates from blood plasma. Plasma water, proteins and nutrients are filtered to tissues from blood capillaries and spread around the cells. Cells incorporate from tissue fluid what is important for their life. They digest and metabolize nutrients and produce substances necessary for their existence and formation of a niche. Products of digestion and metabolic waste are excreted to tissue fluid. Once the hydrostatic pressure of tissue fluid increases, it flows to the nearest lymphatic vessel with open entrance.  Proteins, cellular debris, erythrocytes and leukocytes are too large to enter back blood capillaries so they find their way to large open lymphatic lumen. Further, they are transported to larger collecting lymphatics due to spontaneous contractions of lymph vessel segments with unidirectional valves and finally throung a number of lymph nodes  to the thoracic duct which is the largest  lymphatic vessel in the thorax. There thoracic duct merges with subclavian vein and lymph flows to the blood circulation. Taken together, the lymphatic system serves maintaining a proper chemical environment for tissue cells, removal of materials synthetized by tissues and removal of vaste products. The other most important function is transport away from tissues of penetrating microorganisms. 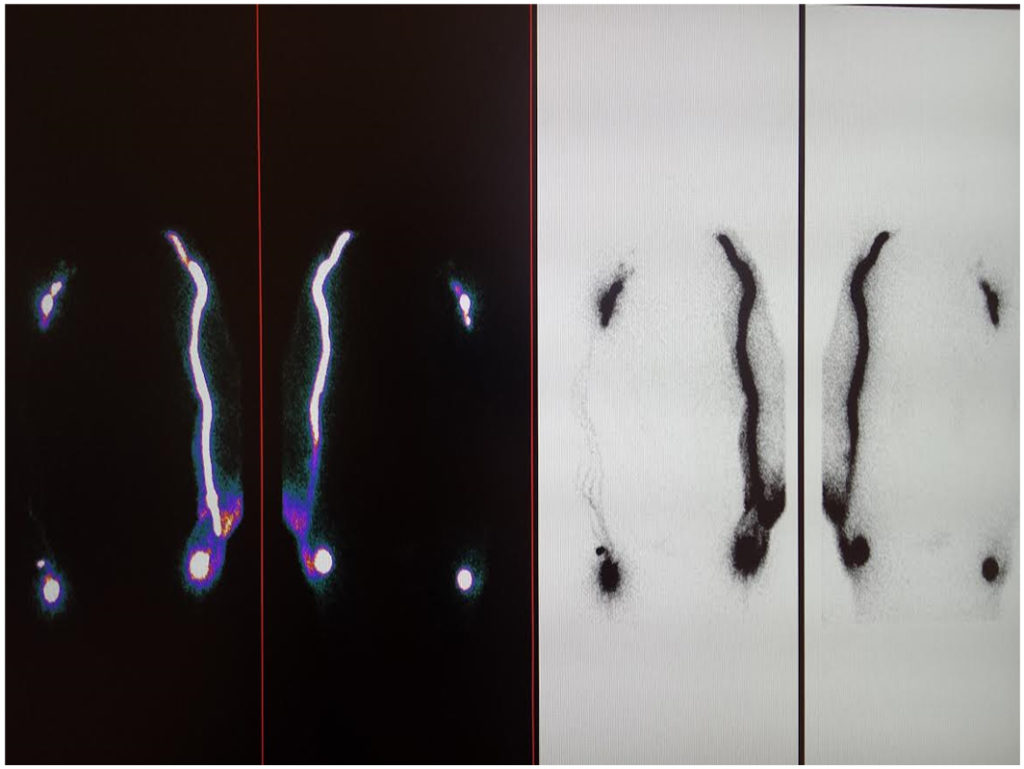 Fig. 1. Lymphoscintigram of a female patients with left limb lymphedema after histerectomy and radiotherapy because of uterine cancer. Tubings filled with isotope in the calf, thigh and outlet in the lumbar region.

In our body all  regions are drained by lymphatic vessels. The continuous drainage  function protects against accumulation of excess water, proteins and  substances produced in tissues. Excessive accumulation of tissue fluid  develops when  lymphatics become obliterated. This happens most frequently after limb  bacterial dermatitis, trauma of soft tissues and bone fractures,  lymphadenectomy and irradiation in cancer therapy. In course of time calf dermatitis caused by bacteria develops, followed after each episode by increase in limb size. Traumatized limb tissues are  colonized by foot bacteria which destruct lymphatics. In breast and uterine cancer removal of nodes and irradiation are necessary. Patients survive now much longer. Around 50% of them develop lymphedema adversely affecting limb function and burdened by recurrent erysipelas-like attacks.

According to the statistics of the World Health Organization around 300 million people are affected by the pathological edema of limbs. Effective treatment of such large cohorts has been a challenge for centuries. However, none of the so far applied conservative and surgical methods proved to restore the shape and function of limbs to normal conditions.

We propose a simple operation for bypassing the site of lymph vessels obstruction by  subcutaneous implantation of  silicone tubings placed from lower leg to the lumbar or hypogastric regions or hand along forearm and arm to scapular region. 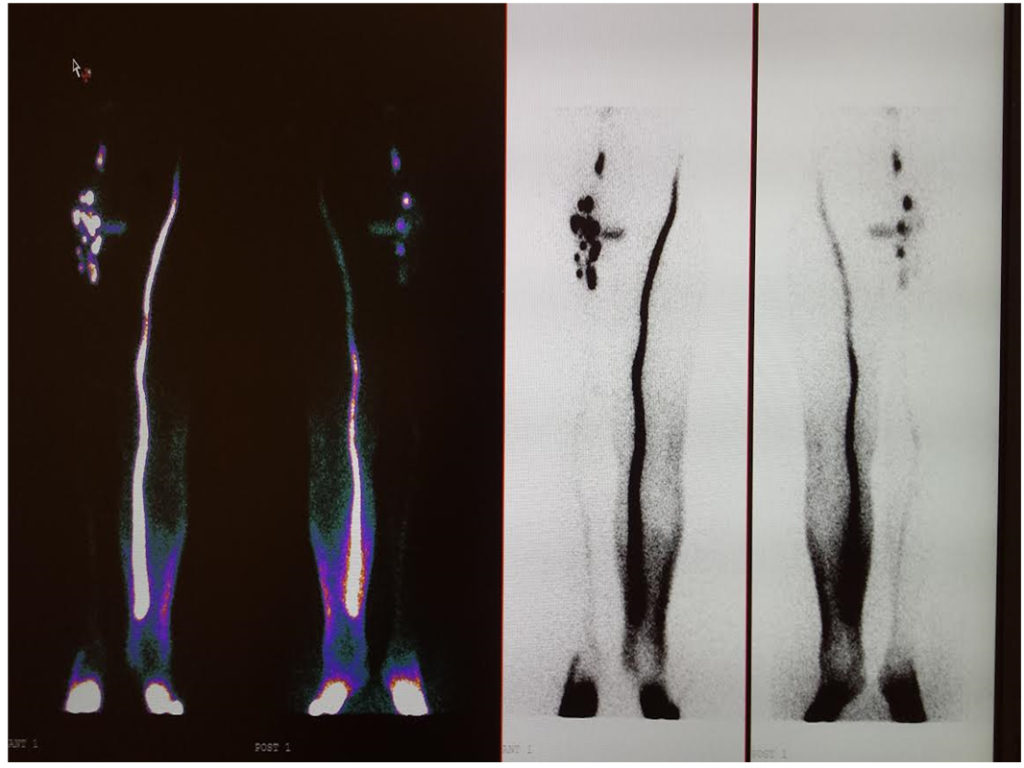 In a group of over 100 patients with obstructive lymphedema of lower and upper limbs, developed after lymphadenectomy and irradiation in pelvis because of uterine cancer and mastectectomy with lymphadenectomy, implantation was  done followed by external compression as intermittent pneumatic compression and elastic support of tissues. Postoperative circumference measurements, lymphoscintigraphy, ultrasonography and magnetic resonance imaging of tissues were carried out in a  two-five years follow-up.

Silicone tubings
Sterile silicone tubing medical grade o.d. 3mm and i.d. 2mm was used .  The tubing material was hydrophobic preventing any ingrowth of connective tissue into the lumen and around them. Three tubings of  a length adjusted to the to that of the limb were tied together and multiple lateral holes  were made at distances of 3cm. There was no fixation of tubings  to the surrounding tissues.

Implantation technique
In lower limbs, a 3cm long incision was made at the border of hypogastrium or  lumbar region 10 cm above the inguinal crease. A 1.5cm wide and 100 cm long conductor metal tube was introduced under the skin  and bluntly moved toward the thigh and internal aspect of the calf. Other 2 cm long incisions were made in the groin, calf and  the lower end of the conductor was exteriorized.  In upper limbs, incisions were made at the radial-carpal joint,  elbow and scapular  levels. Silicone tubings were introduced into its lumen and moved upwards. Conductor tube was then removed.

The postoperative course was uneventful in all cases.  Inflammatory reaction along the implant was not observed. In 5 patients limited inflammation episode was observed at the upper end of the implant in the hypogastrium, most likely due to the reaction to microbes drained from the calf. It was controlled by seven days of oral amoxicillin without recurrency. There was less restriction in limb movements, easy squatting or kneeling. No inflammatory reaction was observed in upper limbs.

Circumference changes
Lower limbs. The circumference decreased in all patients within the first 2 weeks, differently at different levels of the limb, by -3.2 to -3.9 % with a range from +3 to – 17%. (p<0.05). Interestingly, the process of decreasing limb size was fastest in the first weeks after implantation with slow changes afterwards.

Upper limbs. A fast decrease of limb circumference was observed already during the first days after implantation  lasting for  2 weeks to become slower thereafter. It was 10% in the mid-forearm and 5% in the mid-arm during week 1 to reach 15 and 10% after 4 months, respectively (p<0.05).

This is the first report on implantation of silicone drains substituting occluded lymphatic collectors of the lower and upper limbs superficial system in advanced stages of lymphedema. The study provided the following observations: a) evident fast decrease of calf circumference from the day of implantation and stabilization after weeks, b) patency of tubings on ultrasonography and lymphoscintigraphy, c)  accumulation of fluid around the tubings  in all cases, d) lack of tissue reaction to silicone tubings. It has been documented that the medical grade silicone tubings are biologically inert and do not evoke any evident foreign body reaction. Moreover, they are hydrophobic preventing obstruction by ingrowing fibrous tissue. It is also important that  bacteria do not adhere to the silicone surfaces.

Taken together, the simplicity of the surgical procedure and lack of reaction to the implant make the method worth applying in advanced stages of lymphedema with large volumes of accumulated tissue fluid.