Colorectal cancer (CRC) is one of the most frequent malignant diseases worldwide, with a high rate of mortality. The detection of precancerous and early-stage CRC is central to improve prognosis and the survival rate of patients. Currently, colon endoscopic examination (colonoscopy) is used as the gold standard to detect and establish the diagnosis of this cancer. This procedure is however invasive, unpleasant, costly, so inadequate for large population screening.

Stool specimens constitute a noninvasive access to tumor material and consequently of high potential interest for the development of fecal-based DNA testing using the polymerase chain reaction (PCR), a technology in molecular biology used to amplify a single or multiple molecular markers. Prior studies showed that the number of colonocytes exfoliated into stool is about 4-5 fold greater than number of healthy ones. Consequently, a number of assays for detection of cancer-speciﬁc DNA alterations from fecal DNA have been proposed for screening and detecting early-stage colon cancer.

The technical challenge here is that stool composition is highly complex, including PCR inhibitors (i.e., bile salts, haemoglobin degradation products and polysaccharides). Accordingly, consistent extraction of high-quality DNA from fecal samples can be challenging. Removing PCR inhibitors from stool has been extensively studied, with some authors describing dilution of inhibited samples or use of clean-up columns. However, these techniques are limited because they present a number of problems, such as reduced DNA yields which leads to decrease the detection of molecular markers. Recent advances in the development of molecular markers in fecal specimens increase hope for its use as a screening tool. Indeed, epigenetics alterations that result from the carcinogenesis process can be detected in the colonocytes exfoliated from the lesion into the fecal matter. Spermidine, a polyamine compound, has been reported to have a high affinity for plant and stool DNA and could be used as PCR facilitators. 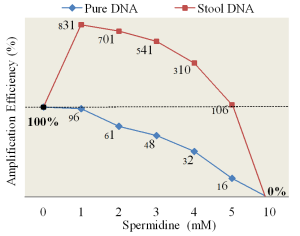 Fig. 2. PCR efficiencies of the Alb gene at various concentrations of Spermidine, ranging from 1 mM to 10 mM. For example, Pure DNA and Stool DNA with 1 mM Spermidine showing 96% and 831% of amplification efficiency (AE) of the true AE (100%) in absence of Spermidine.

In this study, we examined the effect of Spermidine when using stool samples on the amplification of 1/Albumin (Alb), a housekeeping gene and 2/ the methylated marker set composed of NPY, PENK, and WIF1 which has already shown strong promise for noninvasive CRC diagnosis. We demonstrated that Spermidine shows a concentration-dependent effect on the amplification efficiency with an optimum reached at about 1 mM Spermidine (Fig. 1) and then decreasing up to a total inhibition at the concentration of 10 mM (Fig. 2). Our hypothesis is that spermidine can block the action of PCR inhibitors (possibly by binding them and or making them more thermolabile, or, alternatively, that by binding DNA at low concentrations it can drastically decrease the action of the PCR inhibitors). In addition, we applied this finding to optimize the methylation quantification of NPY, PENK, and WIF1, using the Quantitative Multiplex-Methylation Specific PCR (QM-MSP). We determined an optimal window for the amplification of these three methylated genes with 100 ng of undiluted stool DNA added of 1 mM Spermidine. We show that adding the Spermidine to the QM-MSP mixture allows a sensitive analysis of stool DNA methylation of these markers by a factor of 1.5 to 23 fold.

In conclusion, we present a proof of principle for using spermidine to allow alleviation of the PCR inhibitors carryover which may compromise stool-DNA amplification. We also demonstrated it’s useful for assessing methylation-specific markers that could be used for CRC tumors detection. These results, if validated in a large cohort, will lead to the manufacturing of a highly specific method to be used in clinical practice for colorectal cancer diagnosis.

Improved amplification efficiency on stool samples by addition of spermidine and its use for non-invasive detection of colorectal cancer.
Roperch JP, Benzekri K, Mansour H, Incitti R
BMC Biotechnol. 2015 May 29