How the embryo obtains some of it’s organelles is still a mystery. We know that the nucleus that contains the genetic code comes from the father and the mother via the sperm and egg. We also know that the mitochondria that generates the energy for the cell comes only from the egg. Interestingly though, it is not clear how animals inherit the two centrioles that are essential to organize the cell cytoskeletons and facilitate cell division. No centrioles are observed in the mature egg, so it appears that the egg does not provide the first embryonic centrioles. Only one centriole is observed in the sperm of many animals including human, other mammals, and insects (Fig. 1B). Therefore, when the sperm fertilizes the egg, the embryo (also known as a zygote at this early stage) would have a single centriole. Since having one centriole instead of two can lead to a failure in cell division, an important question is where the zygote obtains it’s second centriole. 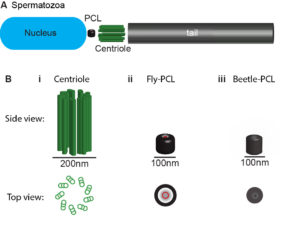 To address this question we study the sperm of insects like fruit flies (Drosophila melanogaster) and flour beetles (Tribolium castaneum). Previously, we discovered that fly sperm has a second novel, atypical centriole, in addition to the well-known typical centriole. We named this new centriole the Proximal Centriole-Like (PCL). In general, centrioles are very easy to identify using electron miscopy because they have a barrel shape composed of 27 large tubules (microtubules) organized into nine groups of three (Fig. 1Bi). Also, the centriole is a one of the largest structures in the cell (the size of a small bacteria); it is about 500 nm long and 200 nm in diameter. However, the PCL has no microtubules and is only 100 nm long and 100 nm in diameter (about 10% of the size of a centriole) (Fig. 1Bii). This very different structure explains why the many scientists studying sperm have not identified the PCL. Additional studies found that the fly’s PCL functions as the second centriole of the zygote and is essential for normal zygote division. Overall, these studies found that the second centriole is a novel atypical centriole and this solves the mystery of the origin of the second centriole in the fly.

Next, it became important to find out if atypical centrioles such as PCL are found in the sperm of other animals. To test that, we repeated this investigation in the flour beetle. We chose beetles because they are very different insects than flies and are separated by ~300 millions years of evolution (a similar difference is between humans and fish). We found that the beetles too have one typical centriole and an atypical centriole that resembles PCL. Like the fly, the beetle’s PCL lacks microtubules and contains the centriolar protein Ana1 (Fig. 1Biii). However, small differences were found in the internal structures of the PCL. Importantly, these findings suggest that the PCL is a common atypical centriole in insects and suggests the idea that the structural definition of centriole could be broadened. Based on this study, we hypothesize that sexually reproducing animals have two centrioles, but that their structures can be varied. Since human and most other mammalian sperm, like that of flies and beetles, are thought to only possess a single centriole, this study raises the possibility that humans may also have atypical centrioles in their sperm. Further investigation of centrioles in the sperm of humans and mammals is required to advance our understanding in centriole inheritance during reproduction.