Advance in nanotechnology has prompted the science world to recognize the risk and potential health effects associated with the growing as well as incongruous use of nanoparticles. The current methods often employ a predictive toxicology approach that uses in vitro screening assays in conjunction with in vivo study results for nano safety evaluation. Stem cells which are undifferentiated cells that have high replicative potential and multilineage differentiation capacity have recently gained much interest as an alternative cell source for evaluating nanomaterial toxicity. 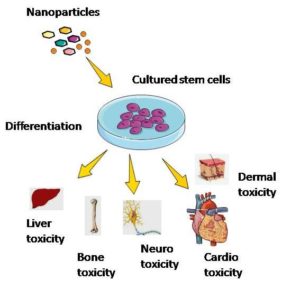 Optimizing stem cell technology in predicting nanomaterial toxicity has still a long way to go.  According to the source of origin, stem cells are categorized into embryonic or adult stem cells. Human Embryonic stem cells (hESCs) are promising cells system for nanotoxicology assessment as they are pluripotent. This inherent property of hESCs differentiating into any type of cells are made use in high throughput screening of drugs and other pharmaceuticals  as well as chemicals with emphasis to pharamco and toxicokinetic parameters. The reservoir for the functional cells of any tissue is met by the adult stem cells residing in that tissue. The disturbances in the residing stem cell population will alter the normal turnover of functional cells subsequently causing pathological changes. Neoplastic changes can also be expected, if the toxic exurbances exceeds the normal growth rate of the cell population. Evaluation of nano material interaction with stem cells therefore requires much attention. Differentiated stem cell culture often forms a model for cell source of target tissue in the body and hence could mimic the tissue response to nanomaterial exposure.  The nano- bio interactions of interest include effects on cellular uptake, cell membrane integrity, influence on cell signaling, reactive oxygen species generation and oxidative stress, DNA damage, genotoxicity, proliferation rate cell necrosis or apoptosis. However much research is required still to establish appropriate toxicity endpoints in toxicological screening with stem cells.