Diabetes is a risk factor for developing Alzheimer’s disease (AD). The underlying mechanism seems to be that insulin signaling in the brain of patients with AD is very much impaired. Insulin not only controls blood sugar levels, but also acts as a growth factor. It activates cell repair and growth mechanisms. Since neurons are not being replaced and have to last a lifetime, damage can accumulate over decades and becomes visible in old age as AD. We therefore investigated if drugs that have been developed to treat diabetes can prevent the neurodegenerative processes in the brain. The most potent diabetes drugs on the market are analogues of the incretin hormone Glucagon-like peptide-1 (GLP-1). Examples are as liraglutide (Victoza®), exendin-4 (Byetta®), and lixisenatide Lyxumia®). These drugs are very popular and effective in the clinic. We have tested these drugs, and they have shown very promising results in preclinical studies in transgenic mouse models of AD. These mouse models express human mutated genes that produce high levels of the protein beta-amyloid, a protein that builds up as plaques in the brains of patients with AD. Testing liraglutide in this mouse model showed that the key hallmarks of AD are much reduced. In a previous study, we tested this drug in mice that were at a stage that is comparable to a person who just has been diagnosed with AD. The amyloid plaques in the brains were much reduced, memory formation was normal, synapses were protected, and other key markers for AD were normalised. We have also shown that insulin signaling is normalised in the brains of these mice. 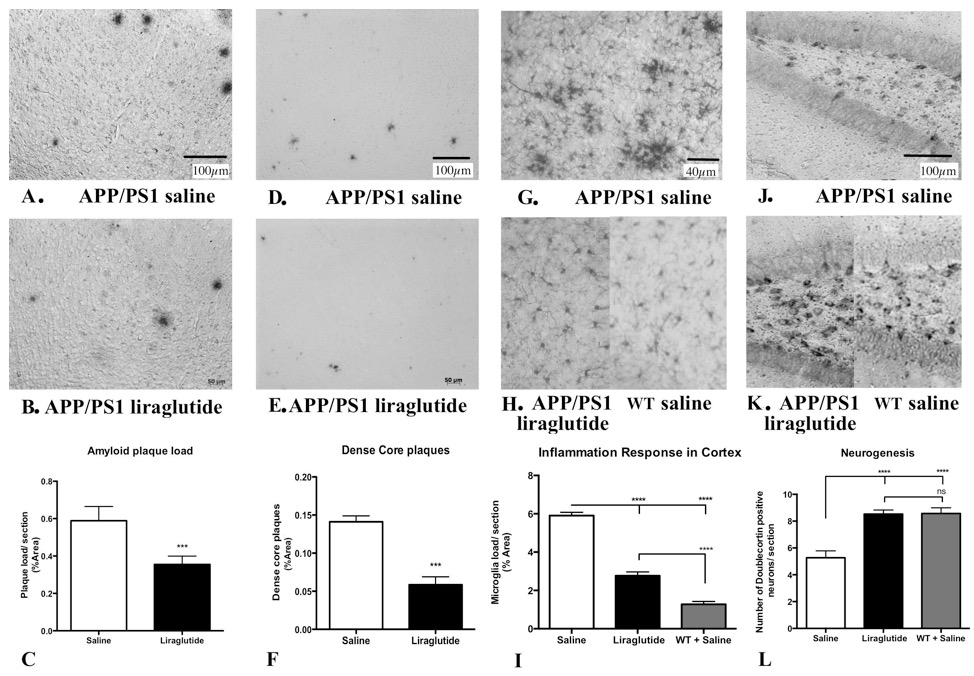 Fig. 1. Liraglutide prevented the development of key Alzheimer biomarkers in the brains of transgenic mice. The amount of amyloid plaques in the cortex is much reduced as compared to the control group. The amount of dense-core amyloid plaques, the ones that induce the chronic inflammation response in the brain, is also kept at a very low level by the drug. Activated microglia, a sign of chronic inflammation, is much lower in the drug group. The inflammation increases oxidative stress and is damaging over time. Finally, the number of new neurons developing is much higher in the drug group. Chronic inflammation prevents stem cells from dividing and differentiating into neurons or glia helper cells.

In our recent study, we tested liraglutide at an early stage of AD development in the transgenic AD mice to see if it is possible to prevent the progression of AD. We found that if you treat the mice before the first sypmptoms of AD become visible, memory formation is not impaired, amyloid plaques are low in numbers, synapses are protected, and several other key parameters such as inflammation and oxidative stress are kept normal.

This suggests that these drugs have the ability that if people are treated early enough, they will not develop the progressive neurodegenerative symptoms of AD. New early diagnosis tools are being developed that would enable us to identify people much earlier, before they develop the symptoms.

Importantly, we have to check if the results from these animal studies also translate to human patients. Clinical trials that test liraglutide in patients with AD are currently ongoing. A first pilot study conducted by a group at the Aarhus university hospital, Denmark, showed very promising effects. The drug can enter the brain and protect neuronal activity in the AD group, preventing the decline observed in the AD patients that did not get the drug. A second larger trial is currently ongoing in England. This trial should finish in 2016 and hopefully will show a good effect in treating AD.