Adenylyl cyclases (AC) are proteins expressed throughout the human body. ACs have a central role in cellular and neuronal function. A number of different proteins and ions can interact with ACs and modulate their activity. ACs have been linked to several physiological processes, such as pain, memory, heart function, depression, and drug dependence, to name a few. At the molecular level ACs function to produce cAMP (cyclic adenosine monophosphate) from the cellular energy storage molecule ATP (adenosine triphosphate). The produced cAMP can regulate gene expression and is also important for the maintenance of neuronal adaptive changes. 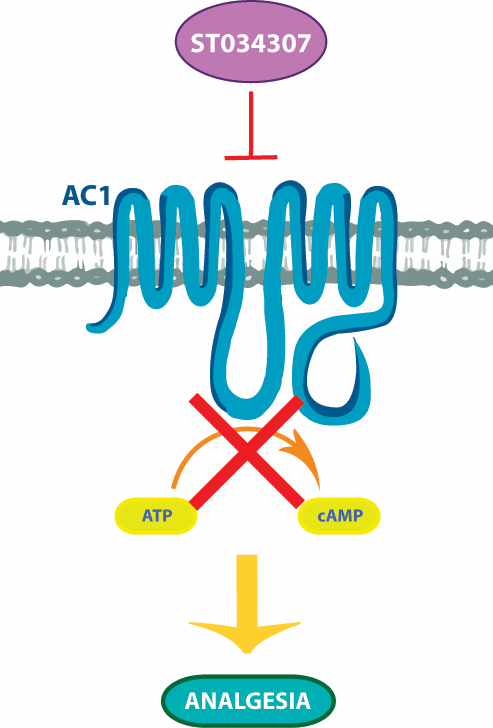 In humans there are 9 different isoforms of ACs bound to cellular membranes. Each of these isoforms has specific sites of expression and physiological functions. AC isoforms are also differentially regulated by distinct cellular processes. Therefore, it has been suggested that selective inhibition of AC isoforms could lead to new drug therapies.

Previous studies indicate that inhibition of adenylyl cyclase 1 (AC1) can lead to analgesia and potentially reduce the effects of opioid dependence. Notably, those studies also suggested that non-selective inhibition of AC1 and the closely related adenylyl cyclase 8 (AC8) could cause undesired side effects, such as memory impairment. In our study we screened a drug library to find an inhibitor of AC1. From the drug library screen we identified compound ST034307, which in addition to inhibiting AC1, did not inhibit AC8 or any other membrane-bound AC isoform. These results indicated unprecedented selectivity.

The following experiments were designed to determine the mechanism by which ST034307 inhibited AC1. We tested several different methods of activation AC1 and ST034307 inhibited all of them. Our results also indicated that ST034307 was a direct inhibitor of AC1 and was not acting through other possible mechanisms. Moreover, we showed that ST034307 was an effective AC1 inhibitor in mouse hippocampal preparations, indicating that the compound is effective in native tissue.

The opioids commonly used to treat pain act though the μ opioid receptor (MOR). Activation of MOR causes inhibition of ACs. Notably, MOR and AC1 are present in brain areas that are linked to pain and nociception. ST034307 enhanced the inhibition of AC1 by the MOR. Additionally, ST034307 inhibited a molecular MOR response that is linked to opioid dependence. The last experiment presented in the manuscript used a mouse model of inflammatory pain and showed that ST034307 was analgesic.

In summary, we have identified a selective AC1 inhibitor and extensively characterized the compound to describe its molecular mechanism. ST034307 inhibited endogenous AC1 in mouse preparations, inhibited a cellular adaptive response linked to opioid dependence, and was an effective analgesic agent in mice.