A “selfish ribosome” as the origin of cellular life

Could there have been a form of “life” that integrated genetic information, protein translation, and the molecular machinery necessary to replicate itself before the first cells? Might such an entity still exist within our cells as a “living fossil”?

A couple of years ago, Meredith Root-Bernstein, an ecologist and evolutionary biologist then doing a post-doctoral fellowship at Oxford University suggested to her father, Robert Root-Bernstein, a physiologist who also works on origins of life problems at Michigan State University, that the answers to these questions might be the ribosome.

Robert was intrigued, but the difficulties with suggesting that the ribosome might “selfishly” replicate itself initially seemed immense.  Ribosomes are made up of two types of chemical components. One is a set of three ribosomal RNA sequences (rRNAs) that form the “skeleton” of the ribosome structure. The “flesh” of the ribosome is composed of a set of about 50 proteins that organize themselves on the rRNA scaffold . The fleshed-out ribosome is then capable of binding messenger RNAs (mRNAs) that encode protein sequences;  transfer RNAs (tRNAs) that carry the amino acids required to make the protein sequences; and catalyzing the synthesis of the mRNA-encoded proteins from the amino acids carried by the tRNAs. All of these functions are carried out by chromosomal genes in modern organisms. 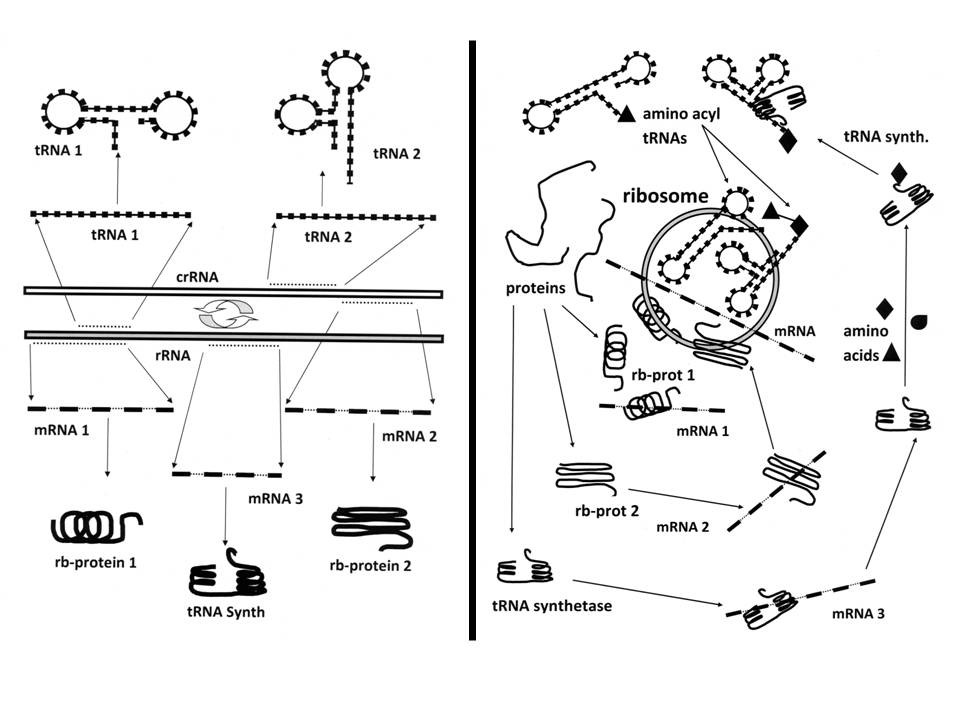 Cartoon providing an overview of the major information-encoding features of the self-replicating ribosome theory. LEFT: The rRNA (center, thick gray line) encodes both tRNA and mRNA and can also be transcribed into a complementary rRNA sequence (crRNA, white line) that also encodes tRNA and mRNA. The mRNA (and thus the original rRNA) encode various protein modules that include various ribosomal proteins, tRNA synthetases, and enzyme active sites. The rRNA and the tRNAs, mRNAs and proteins that it encodes provide the key elements necessary for the ribosome to replicate itself. RIGHT: Cartoon providing an overview of how the components described in Figure 2 interact to create a functioning ribosome capable of carrying out translation and simple metabolic control. The rRNA (thick gray circle, center) folds into a conformation appropriate for binding ribosome-binding proteins (rb-proteins). These rb-proteins not only provide ribosomal functions such as aiding in the binding of tRNAs, but also autogenously regulate their own production by binding to mRNA sequences homologous to their rRNA binding sites. Some of these proteins also carry out additional metabolic functions such as attaching amino acids to their appropriate tRNAs to create amino acyl-tRNAs that are used by the ribosome to synthesize peptides or proteins from the attached amino acids. The result of this is an auto-regulated system of ribosome-directed replication, transcription and translation that encodes all of the components necessary for the ribosome to replicate itself.

To imagine a self-replicating ribosome is therefore to imagine that rRNA encodes “genes” for, 1) the rRNA scaffold itself, 2) the mRNAs required to encode the 50 or so ribosomal proteins, 3) the tRNAs that are required to “read” the mRNA, and 4) the protein enzymes required to put the amino acids on the tRNAs in preparation for protein synthesis. Since the current dogma is that rRNA encodes no genes whatsoever, let alone a complete set of tRNAs, this suggestion required a huge imaginative leap.

Moreover, to be selfishly self-replication, the ribosome must produce a self-regulating metabolic network. Because the source of the mRNA encoding rRNA-binding proteins (rb proteins) is the rRNA itself, rb proteins should also bind to the mRNA that encodes them, thereby regulating  their own production (a process called “autogenous control”). Similarly, because the rRNA must produce mRNAs that encode the proteins that enzymatically add amino acids to tRNAs (tRNA synthetases), these  tRNA-binding proteins must also bind to their own mRNAs (and rRNAs).

It all sounds too unlikely to be true, but true it is! The Root-Bernsteins have provided evidence for all of these unlikely predictions in a pair of papers published in the Journal of Theoretical Biology.   Surprisingly, some of their key data have been in the literature for decades without the implications being understood. Several groups had noticed that rRNA seemed to be composed of a series of ligated tRNA sequences but did not consider the possibility that rRNA might once have encoded tRNAs. Instances of rRNA, or its complementary sequence, encoding active proteins still occur in modern organisms. Experimental evidence also exists for autogenous metabolic control of almost all rb proteins and many tRNA synthetases by means of binding to their own mRNAs.

Put these data together and a good case can be made that ribosomes were once self-replicating “organisms”. If that is true, then perhaps cells and their chromosomes evolved to optimize ribosome function rather than the other way around.

The ribosome as a missing link in prebiotic evolution II: Ribosomes encode ribosomal proteins that bind to common regions of their own mRNAs and rRNAs.
Root-Bernstein R, Root-Bernstein M
J Theor Biol. 2016 May 21