Enzymes are proteins that help chemical reactions to occur within cells and thus, they are essential to their life and function. They produce most of the molecules found in cells, and are classified by their function and the molecules involved in the biochemical reaction. Methyltransferases transfer one or more methyl (-CH3) groups from one molecule (donor) to another one (acceptor). 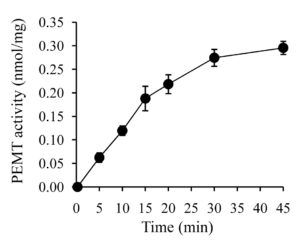 Phospholipids are a heterogeneous family of hydrophobic molecules, called lipids, and are the main structural component of the biological membrane. The latter delineates the territory of a cell and of its subcellular compartments, called organelles. The most abundant phospholipid in most animal cells is phosphatidylcholine (PC). This lipid can be synthesized by the addition of three methyl groups from S-adenosyl-L-methionine (SAM) to another phospholipid, called phosphatidylethanolamine (PE). The addition of these methyl groups is carried out by enzymes named PE methyltransferases (PEMT).

The ability to quantify and characterize PE methyltransferase activity is important as these enzymes are relevant to the function of the cell not only by contributing to the production of PC, which is the main lipid in animal cells, so that a cell can grow and multiply, but also by fulfilling other important cellular functions. In mammals, PEMTs are mainly found in the liver and to lower levels in adipocytes (fat cells). These enzymes can contribute to fat deposition, cancer, induced cell death, as well as human pathologies such as diet-induced obesity, atherosclerosis, and insulin resistance. In bacteria, PEMT enzymes are also important for normal cell growth, ability to cause disease, and symbiosis with the host plant. 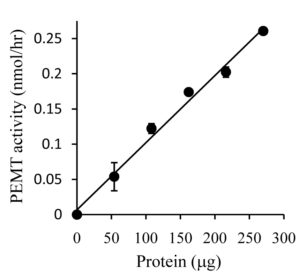 We describe here a simple, quick, and reliable assay to quantify PEMT activity from any type of cells in a test tube. A major advantage of this method is that it allows use of whole cell extracts as an enzyme source and does not require purification of the enzyme, which is very laborious and can be technically very challenging. This assay relies on the incorporation of radioactively labeled methyl donor from SAM onto PE, resulting in radioactive, methylated PE products, which can then be separated from SAM by differential organic solvent extraction. The methylated forms of PE are then quantified by an instrument called scintillation counter. Using Leishmania cell extract as an enzyme source, it was established that PEMT activity was linear as a function of time for at least 20 min (Fig. 1). Also this activity was linearly proportional to the amount of proteins applied when up to 300 μg of cell extracts were used (Fig. 2). This assay can open the avenue to test potential drugs specific to a PEMT of interest in the context of testing new anti-microbial compounds to combat bacterial infections or novel drugs against diet-induced atherosclerosis, obesity, or insulin resistance.