The presence of severe acidosis has been demonstrated to be associated to several pathological conditions, such as multiple sclerosis, brain trauma, spinal cord injury and epilepsy as well as in inflammatory pain, to cite the most relevant. Among several pH sensitive channels, the Acid Sensing Ion Channels (ASICs) have been shown to be particularly relevant in these pathologies. The importance of ASICs is highlighted by several studies demonstrating that their inhibition ameliorates the severity of different neurological diseases as well as inflammatory pain. 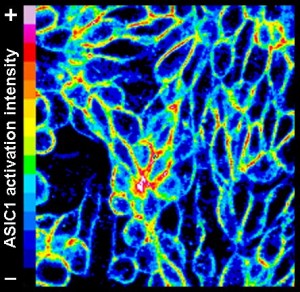 Fig. 1. ASIC1-expressing cells were labeled with VSD and stimulated with an acidic solution in order to activate ASIC1 channels. The image represents the mapping of ASIC1 activation expressed as standard deviation of the VSD fluorescence variation during the time course of the experiment. The intensity of ASIC1 activation is represented with a color coding shown on the left bar.

Thus, there is consensus that ASICs represent an interesting category of druggable channels particularly relevant in the drug discovery campaigns for these pathologies. Unfortunately, the drug discovery process for acid sensitive channels, and in general for ion channels, is still suffering for an unsatisfactory balance between throughput performances and information content, making the discovery process long and expensive and thus delaying the identification of new therapeutic drugs. Electrophysiological studies are the gold standard for the investigation of molecules active on ion channels, although they show inadequate performances for screening purposes, due to experimental time requirements. On the other hand, in recent years, several fluorescence-based automated systems have been developed using optical sensors suitable for many ionic species. In this context, we have set up a methodology based on the use of the voltage sensitive dyes (VSDs). VSDs are fluorescent sensors able to respond to the membrane potential variation induced by ion channel activation. This methodology will prove to be beneficial in speeding-up the quest for novel small molecules aimed at neuroprotection in all the pathologies of the brain that undergo acidification. 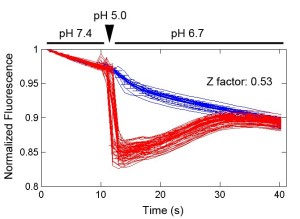 Our innovative approach has some advantages with respect to the available methods. ASIC1 channel activation is performed using the proton as a physiological agonist. In this way, we avoid the use of synthetic or natural molecules able to artificially open the channel or shifting its pH sensitivity, strategies that are frequently used in order to make the study of ASICs easier. We detect ASIC1 channel activity, through the membrane potential variation induced by channel opening, by using VSDs. In this way, the readout of our assay is tightly linked to the channel activity making this technique highly predictive in the identification of potential effective drugs. Our procedure is carried out in full automation using state of the art microscopes equipped with a fluidic system thus enabling all the laboratories to perform our assay. This screening procedure could be adopted, in principle, also for the study of the other ASIC isoforms thus extending its applicability. This methodology will prove to be useful for drug screening programs aimed at developing new ASICs modulators, both in the research institutions and in the pharmacological industry.