A synthetic natural like product endowed with antiproliferative activity

The World Health Organization has reported that cancer is one of the major causes of morbidity and mortality affecting population in all countries and regions. The 2014 World Cancer Report of WHO indicated that in 2012 there were approximately 14 million of new cases and 8 million of cancer-related deaths.

Many drugs of natural origin are utilized in tumor treatment such as Doxorubicin, Daunorubicin, Vincristine and Vinblastine. Other drugs, such as the taxanes Paclitaxel and Docetaxel, are conveniently obtained by derivatization of natural products. Natural products differ considerably from synthetic compounds in several molecular properties: natural products in general contain more oxygen atoms and fewer nitrogen atoms per molecule than synthetic compounds. Moreover, they contain more chiral centers, more fused rings, but fewer aromatic rings and rotatable bonds. 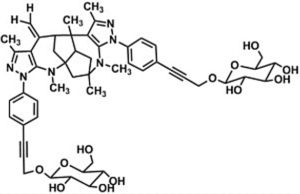 In our article we have described the synthesis of a complex molecule showing the structural complexity and properties of many biologically active natural products. In fact, the structure of the molecule comprises a polycyclic system with six fused rings, five chiral centres and two oxygen-rich glucose moieties.

Natural products are often subject of several controversies focused on apparent conflicts between the needs of environmental protection and the need of new drugs, therefore the opportunity to obtain a synthetic natural-like compound is very valuable.

Glucose is the major cellular substrate for energy generation in mammalian cells. It is well known that tumor cells can modify their metabolic pathways aimed to the glucose utilization to sustain their rapid proliferation and adapt themselves to survive in hypoxic conditions. The glucose uptake across the plasma membrane is mediated by a family of facilitative glucose transporters (GLUT). It has been reported that to satisfy the high glucose requirement and the increase in glucose uptake, the majority of cancer cells overexpress the GLUT family members. In line with these data our idea was to obtain an O-glycoconjugate derivative with the hope that the glucose moiety would be used as effective substrate for glucose transporters. This type of cell membrane transport might improve, in addition to a probable passive diffusion transport, the intake of compound in the cancer cells thus increasing its activity.

The compound was evaluated by NCI (USA) for its in vitro antiproliferative activity against 57 human tumoral cell lines, showing GI50 (growth inhibition of 50%) values in the range 0.47-5.43 µM, with the mean value of 1.51 µM. To elucidate the mechanism responsible for the inhibitory effect of the compound, we focused our study on MDA-MB231, a very aggressive and poorly differentiated breast cancer cell line, which does not express estrogen, progesterone and HER-2/neu receptors. Light microscopy observations showed that after being exposed to the compound, MDA-MB231 cells underwent to a reduction in cell number, exhibited a flattened and enlarged cell shape while no signs of cell death were observed. This morphological modification was maintained also after 8 days of treatment, suggesting that the compound induced an irreversible arrest of cell cycle.

Flow cytometric analysis showed that the compound increased the percentage of cells confined in G2/M phase. The progression from G2 to mitosis is controlled by the mitosis-promoting factor (MPF), which comprises a complex of Cdc2 (CDK1) and cyclin B1. In MDA-MB231 cells, the compound significantly decreased the expression levels of both cyclin B1 and Cdc2, thus favoring the G2/M arrest of cell cycle. Our results also showed that the compound increased in MDA-MB231 cells the level of p21 Cip1/Waf1, a cyclin-dependent kinase inhibitor (CDKI) which has been shown to favour further on the G2/M arrest through binding and inhibiting the cyclin B1/Cdc2 complex.