A tale of pesticide use, resistance and the urge for One-Health

Edible olives and the production of olive oil dates to 5000 BC and, nowadays, it is estimated to occupy an area of 10.2 million hectares. More than 90% of the total area is in the Mediterranean Basin. Throughout time, some insects have evolved to use this new resource. The olive fruit fly has specialized to become monophagous and remains the most important olive tree pest. The intensive use of organophosphates (OPs) in the last 50 years has led to an evolution (or adaptation) of resistance by the insect. In this evolutionary arms race between man and pest, the flies have adapted a pesticide resistance. First reported in the 70s, the resistance mechanism started to be known and understood only in the last twenty years. It concerns more commonly two point-mutations and less commonly a nine-nucleotide deletion in the Ace gene. This gene codes for the enzyme acetylcholinesterase which is inhibited when exposed to OPs in the insect central nervous system, leading to impeded neurotransmission. 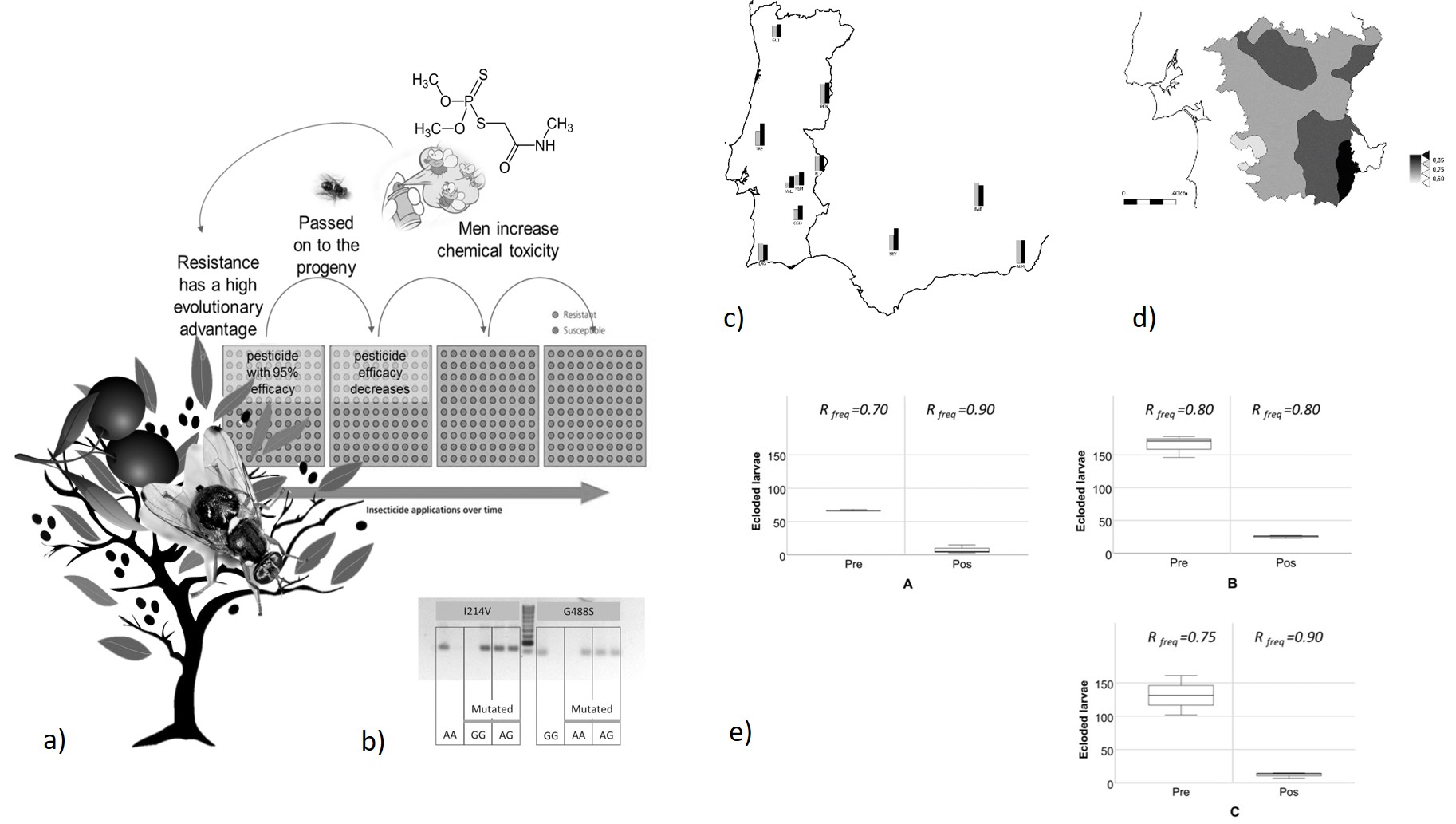 Fig. 1. a) Schematic representation of pesticide resistance establishment in olive fruit fly populations. b) ASP-PCR method for most common resistance Ace gene mutated alleles screening, with positive amplification is indicative of the presence of the specific nucleotide tested at a given position. c) I214V and G488S Ace gene substitutions reported in 2015 (grey bars) and now (black bars). d) kriging estimated region surface where the darker the gray, the greater is the proportion of the resistance-associated alleles (white corresponds to the area with no data). e) Boxplot of olive fruit fly larvae ecloding before and after the application of the OP dimethoate, and R corresponds ro the allele frequency.

The presence of OP-resistant olive fruit flies in Europe has increased and has become widespread, and data suggests a spreading of the variants of the resistance gene from East of the Mediterranean into the Iberian Peninsula. While the more severe nine-nucleotide deletion (Δ3Q) remains undetected in the West, the frequency of the point mutations (I214V and G488S) has significantly increased. We have developed a fast and low-cost allele-specific-primer polymerase chain reaction (ASP-PCR) method and showed that the presence of Ace OP-resistant alleles in the Western and Southern Iberian Peninsula had increased or stabilized when frequencies were already high.

The inclusion of dimethoate, the most commonly used OP in olive groves, in the Priority List of Hazardous Substances (http://www.atsdr.cdc.gov/cercla), and the intention of discontinuing its use from the EU due to health risks, seem not yet to have practical results. Most of the olive groves areas are managed traditionally; dimethoate is still being banned in most of the Mediterranean countries, including Spain, Italy, Greece and Portugal (http://ec.europa.eu/food/plant/pesticides/), but so far its use remains a common practice. As it keeps on being used to control populations of this fly, the resistance alleles will be fixated. In such a scenario the assumption was that no pest population suppression would be achieved at admissible doses of the active ingredient.

However, the results of our field trial unexpectedly plea against the claimed OPs inefficiency on resistant populations. This in-practice field test trial was performed was fully in a real-life context: the product was applied in a production context, by three different operators (company workers) at the concentrations by them defined. Other variables, not even reported, might be aiding the observed decrease in population numbers (e.g., high temperatures or copper application) and the impact of operational control procedures, failures and their rates cannot be determined. In practice, the agronomists and respective production companies observe a marked decrease in population levels of olive fly as aimed, which will impair the needed elimination of OPs applications. The interconnection between people and their needs, animals, plants, and their shared environment -One Health concept- needs to be recognized and worked out in practice.