New drug discovery relies on several phases of safety assessment. One such prominent in vitro safety assessment assay is the “hERG potassium channel assay” for cardiac safety. If a compound blocks the hERG potassium channel in a cardiomyocyte (cardiac muscle cells), it can cause a delay in the action potential which potentially shows up as an arrhythmia (irregular heartbeat). To check if a compound can cause arrhythmia, genetically modified (hERG transfected) human embryonic kidney cells (hERG-transfected HEK293 cell) and Chinese hamster- ovary cells are used regularly, screening hundreds of compounds eventually. Considering the huge number of compounds being tested by pharmaceutical industries, it is not possible to use human adult cardiomyocytes for these tests. However, though their application is completely standardized, reliability on data generated using non-cardiomyocytes is still a topic under discussion. 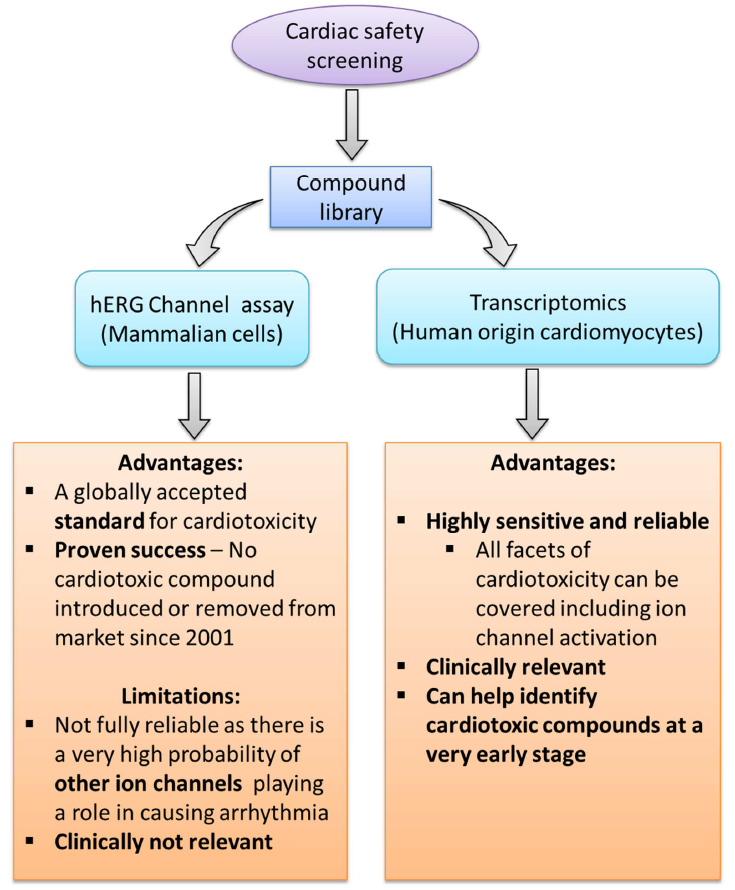 Fig. 1. An overview of Cardiac safety assessment in pharmaceutical industry. The figure shows an overview of advantages and limitations associated with the present industry standard- hERG channel assay and the alternative transcriptomic approach proposed.

Human induced pluripotent stem cell derived cardiomyocytes (hiPSC-CM) are one of the potential substitutes possessing inherent ion channels comparative to a human cardiomyocyte. When treated with test compounds, the changes occurring in the transcriptome (the complete set of RNA transcripts that are produced by the genome) was studied to identify genomic biomarkers. In other words, these biomarkers/changes in the heart cell’s gene signature can be revealed at a very early stage in the cell in response to a drug treatment. The biomarkers thus proposed can henceforth potentially be used to predict drug-induced cardiotoxicity (including arrhythmia) for a specific class of compounds.

In this study, the researchers have proposed a panel of genes that undergo change when treated with 3 major compounds (doxorubicin, daunorubicin and mitoxantrone) belonging to a class of drugs called anthracyclines. This was achieved using a method called “transcriptomic profiling”. The study showed that hiPSC-CMs treated with doxorubicin showed irregular beating and a certain level of cytotoxicity (cell death). Transcriptomic profiling generated a list of 84 genes which showed significant changes due to doxorubicin treatment. These genes were involved in cardiac contraction, ion regulation, response to DNA damage and stress and apoptosis associated genes. These changes to gene expression were verified using real-time PCR analysis. Parallel studies were
conducted on hiPSC-CMs treated with daunorubicin and mitoxantrone (other anthracycline family members with known cardiotoxicity) to study the changes in expression of these 84 genes using real-time PCR analysis. From the results, the final panel of 35 genes that are commonly influenced by all three anthracycline compounds was generated. Most of the genes on this panel are markers representing cardiac stress and stress response of hiPSCCMs exposed to anthracyclines. Hence the authors conclude that with further research, these 35 genes could act as anthracycline responsive genes helping with the screening of further anthracyclines for cardiac toxicity or as biomarkers for compounds having same mechanism of action as doxorubicin, daunorubicin and mitoxantrone.