In order for cells to carry out normal functions, the genetic information stored in DNA needs to be first converted to RNA. This conversion – known as transcription – is carried out by a class of enzymes called the RNA polymerases and is essential for members of all kingdoms of life to survive and proliferate. In bacteria, the RNA polymerase is directed by dissociable sigma factors to specific genes to start transcription. The sigma70 factor guides the RNA polymerase to genes involved in general ‘house-keeping’ while the sigma54 factor to genes in bacterial pathogenicity and various stress responses. A distinct feature of the sigma54-dependent transcription is that it requires activator proteins to open up the double-stranded DNA helix at the expense of high-energy ATP hydrolysis. In essence, the mechanism is analogous to that of a zipper, with the RNA polymerase being the slider, the double-stranded DNA being the teeth and the chemical hydrolysis energy being the force applied from the hand. There is considerable interest in working out sigma54-dependent transcription in mechanistic and structural terms, because this system is extensively used by human, plant and bacterial pathogens in toxin production, antibiotics resistance, colonisation and biofilm formation. 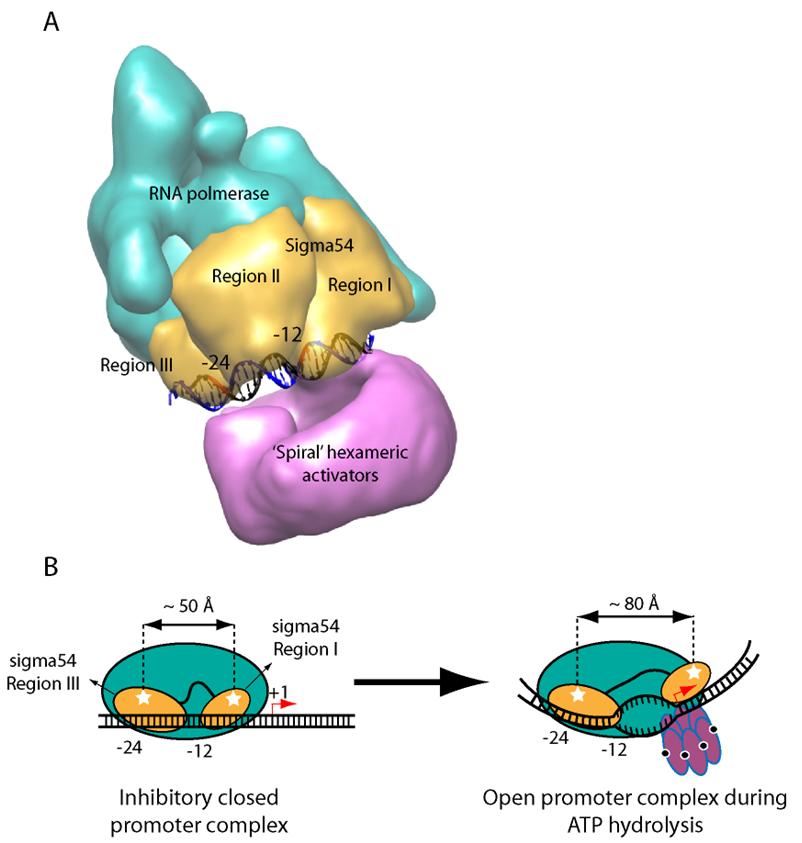 Fig.1. Domain architecture and the proposed mechanism of sigma54-dependent transcription. (A) Cryo-electron microscopy reconstruction of the complex with the promoter DNA modelled in. (B) Domain movement of the sigma54 Region I during the ATP hydrolysis cycle. The DNA positions relative to the transcription start site (+1) are numbered. The black dots represent ATP bound at the hexameric interface of the activator proteins. The two white stars depict the fluorophores used in this single-molecule FRET experiment. Subunits are colour-coded the same way as in (A).

Apparently sigma54-RNA polymerase finds the transcription start site on the promoter DNA by direct binding rather than searching along the DNA. The binding is facilitated by recognition of the -24 DNA element through sigma54 Region III (Fig. 1A). The sigma54 Region I simultaneously binds to the -12 DNA element and forms a network of inhibitory interactions (Fig. 1A). The location of sigma54 Region I blocks the promoter DNA from entering the active site of the RNA polymerase (imagine a piece of fibre caught in a zipper). It requires a mechanical relocation of 30 Å (1 Å is one ten-billionth of a metre) by the action of surface loops on the activator proteins (Fig. 1B), and the loop movement is powered by ATP hydrolysis at the hexameric interface of the activator proteins. The ATP hydrolysis event has been proposed to split up the hexameric ring of the activator proteins, causing them to adopt a spiral arrangement to better engage their targets (Fig. 1A). The sigma54-dependent transcription system is an intricate design by nature particularly suited for a temporal and coordinated control of pathogenicity and stress responses – it merits tight regulation prior to activation, rapid conversion of chemical energy to mechanical motions, allowing diverse responses to external stimuli.

Quite where sigma54 came from remains a mystery – it cannot be rooted in taxonomy and seems to have no obvious structural counterpart anywhere. Current research suggests that it may have initially been a transcription repressor and then evolved to possess an activation responsiveness. The high-resolution structure of sigma54-RNA polymerase engaged with promoter DNA and activator proteins remains to be obtained. Elucidation of such a structure could provide fresh insights into potential target sites for antibiotic action. Also detailed knowledge of the sigma54-dependent gene regulatory circuitry could help us re-route cellular pathways to our advantage, through controlling bacterial infection or enhancing agricultural output.