The clinical importance of AB0 blood groups extends beyond the direct implications on transfusion and organ-transplantation compatibility. The role of AB0 blood group antigens in the pathogenesis of atherosclerosis, peripheral vascular diseases, thromboembolic-, cerebrovascular ischemic events, myocardial infarction and infectious, neoplastic and other diseases has emerged recently. The AB0-dependent pathogenesis of these diseases is thought to involve the von Willebrand Factor (VWF), possibly via a contribution by osteoprotegerin (OPG). OPG and VWF are co-localized in and co-secreted from the Weibel-Palade bodies of the endothelial cells and remain connected in plasma. 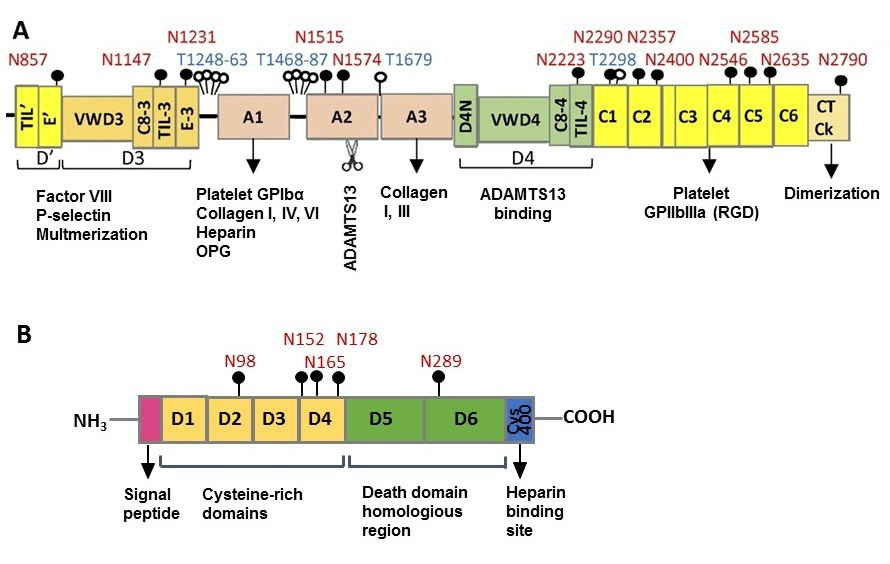 Fig1. A. Schematic structure of mature VWF. The functions of distinct domains are indicated. N- and O-glycans are labelled with filled and open lollipops, respectively. B. Schematic structure of OPG (labeling is similar as in part A). Gogia, S., & Neelamegham, S. (2015). Role of fluid shear stress in regulating VWF structure, function and related blood disorders. Biorheology, 52(5-6), 319–335. http://doi.org/10.3233/BIR-15061

Endothelial dysfunction is an early and important trigger of atherogenesis, emerging as a response to a number of various oxidative, infectious and mechanical injuries. VWF is a marker of these processes. VWF as an array of large multimeric glycoproteins (2-40 concatamers of 250kDa monomers) serves platelet plug formation by binding to sub-endothelial collagen and capturing platelets at high shear- and elongation forces. At the same time VWF carries coagulation FVIII that catalyzes the coagulation cascade to form a fibrin net on the surface of the platelets.

Carbohydrates (13 of the 100 N- and 10 of the 18 O-linked) make up about 20% of VWF’s molecular weight and play a crucial role in its structure and function (Fig. 1A). Approximately 13% of N-glycans and 27% of O-glycans carry AB0 blood group epitopes. Examination of 11,673 participants in the Atherosclerosis Risk in Communities (ARIC, www.cscc.unc.edu/aric/) prospective epidemiologic study demonstrated the intrinsic effects of AB0 on VWF and factor VIII independently.

Osteoprotegerin (OPG) is a member of the tumor necrosis factor receptor family and plays an important role in bone metabolism. Local regulatory properties of OPG in vascular tissues may play a role in atherogenesis and vascular calcification.

Osteoprotegerin is dimeric glycoprotein. 27% of its molecular weight (55 kDa of the monomer) is composed of 5 N-linked glycans (Fig. 1B). Whether any of them contains AB0 antigen determinants is currently unknown.

Our results confirmed that patients with peripheral arterial disease have higher OPG levels compared with controls. VWF binding to collagen (VWF:CB) can have importance in atherosclerosis as it more strongly correlates with OPG levels than VWF level (VWF:Ag) itself. OPG was significantly elevated in non-0 blood groups compared to 0 groups both in patients and controls, and this occurrence was independent of VWF level or activity. Our group evidenced that AB0 blood group type is determinant of OPG levels in blood, like of VWF:Ag. Whether this effect is associated to the N-glycan structures of OPG needs to be explored. A significant correlation between OPG and VWF in peripherial arterial disease patients might contribute to the formation of a high-risk, atherotrombosis-prone biological environment.