Oxidative stress, defined as an imbalance between oxidants and antioxidants in favor of the former, is a hallmark of many diseases, including cardiovascular disease (CVD) and related metabolic syndrome. Modifying uncontrolled oxidative stress may attenuate the development and progression of these diseases, therefore improving the quality of human life.

Epidemiological studies consistently show that plasma concentrations of the antioxidant active pigment bilirubin inversely associate with the risk of cardiovascular and metabolic diseases. Individuals with Gilbert’s syndrome have moderately elevated plasma bilirubin and a reduced risk of CVD and diabetes, while low plasma bilirubin increases the risk of these diseases. However, despite ample epidemiological evidence indicating a protective role of bilirubin against cardiovascular and metabolic diseases, a direct link remains to be established. 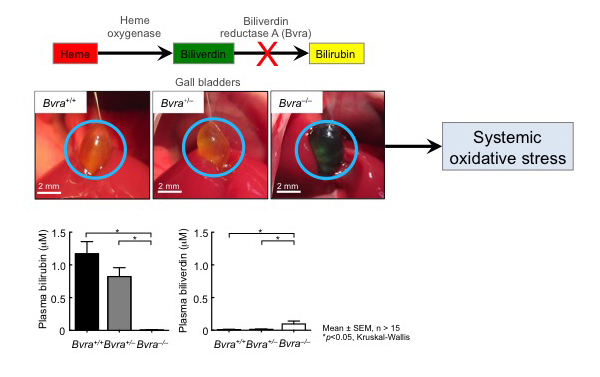 Bilirubin is formed by the enzymatic breakdown of proteins that contain heme, mostly hemoglobin from red blood cells. The color changes associated with heme breakdown are responsible for the color changes of bruises: red heme is first degraded to green biliverdin, from which the yellow bilirubin is formed by biliverdin reductase (BVR). Adult humans produce ~300 mg bilirubin daily. Bilirubin is poorly soluble in water and tightly bound to albumin for its transport in blood. When the albumin-binding capacity is exceeded, bilirubin accumulates in tissues, especially the brain where it causes toxicity. The liver eliminates bilirubin by combining it with the sugar glucuronic acid via glucuronyl transferase, and by excreting the resulting water-soluble conjugated bilirubin into bile, thereby giving the gall bladder its typical yellow color.

Considered originally to be a metabolic waste product, bilirubin in its free, albumin-bound and conjugated forms, has been shown to have potent antioxidant activities in a test tube. The pigment also acts synergistically with vitamin E to protect circulating lipids from being oxidized. In addition, bilirubin has anti-inflammatory activities and the ability to regulate both the function of the cells lining our blood vessels and lipid metabolism. Bilirubin has also been shown to protect rats with elevated concentrations of the pigment against oxidative damage induced by high oxygen concentrations. Similarly, compared with the normal population, individuals with Gilbert’s syndrome have reduced signs of oxidative stress. Despite this however, evidence that physiological concentrations of bilirubin protect against oxidative stress in vivo has been lacking.

To obtain this outstanding piece of evidence, we decided to generate a mouse devoid of the enzyme that forms bilirubin, i.e., a mouse deficient in the Bvra gene. Compared with normal mice, the Bvra–/– mouse has about 200-fold less plasma bilirubin and modestly elevated biliverdin (to about 10% of the normal bilirubin concentration). Consistent with these changes, and most strikingly, the gall bladder of Bvra–/– mice is green, reflecting the presence of biliverdin as the major pigment in the bile of these animals. The effective absence of bilirubin from plasma makes Bvra–/– mice a useful novel tool to address the physiological roles of bilirubin. Focusing on the function of circulating bilirubin as endogenous antioxidant, we show that Bvra deficiency heightens systemic oxidative stress, as indicated by an increase in the extent to which plasma lipids and red blood cells peroxiredoxin-2 (a major oxidant-detoxifying enzyme) are oxidized.

To summarize, Bvra deficient mice lack bilirubin, and they experience higher systemic oxidative stress, demonstrating that physiological concentrations of bilirubin in plasma attenuate endogenous oxidative stress. This new knowledge is important as it may ultimately be of benefit to combat a variety of diseases in which oxidative stress has been implied, (including CVD and metabolic syndrome) and where the protective effects of bilirubin have long been inferred.