This research looked at statistical relationships between access to a car and the self-reported health and mental health of people aged 65years or older, living in Northern Ireland. The analysis used the Northern Ireland Longitudinal Study (NILS), a health-records based, Census-linked study representative of approximately 28% of the population of Northern Ireland. The study has a link to the 2001- and 2011 Northern Ireland Census returns. The sample of this study consisted of more than 65,000 individuals. 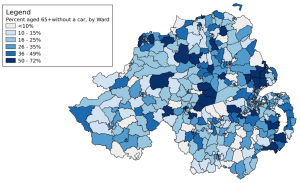 The results showed that older people without access to a car experience a noticeable health- and mental health disadvantage compared with those who have access to a car. Elders who gave up their car between 2001 and 2011, and those who did not have a car at either time-point are significantly more likely than those who had a car at both time-points to report poor health and poor mental health on the 2011- Census questionnaire. This is the case especially for older people who live on their own (single households) and in areas without sufficient supply of alternative modes of (public) transport.

The study yielded two interesting results regarding living alone and living in rural areas: Firstly, living alone does not in itself pose a health risk to older people.

Single-living elders reported worse health only if they did not have access to a car. Those with access to a car were no less likely than elders living as married couples or with relatives to experience poor health or poor mental health. Importantly, those without access to a car likely face a double disadvantage: many have difficulty reaching services on their own and may not always have someone who could offer a lift. Also, social contacts beyond the immediate neighborhood can be difficult to maintain without a car. Thus, older people without an independent means of transport are at an increased risk of social isolation and loneliness.

Secondly, not having access to a car can be a problem for older people regardless whether they live in remote rural, intermediate or urban areas. Health-differences between rural and urban areas lose their statistical significance when having no access to a car is adjusted for. The findings point to the importance of mobility and independence. For many, having access to a car can compensate the loss of physical mobility the process of ageing often entails. When the car is taken away, people with impaired mobility often have problems accessing even services that are located relatively nearby. Where public transport is provided, it may be inaccessible to persons who may have difficulty walking the distance to the nearest bus stop. Many of these elders, however, would still be perfectly able to drive.

The findings indicate to policy makers that assessments of older people’s transport needs should not just focus on rural areas, but also pay attention to intermediate and urban areas. Older people without a car may be deprived of services even in urban areas if accessible alternative means of transport are not provided.

The findings also suggest that the car is more than just a means of transport. It can help older people maintain their independence, autonomy and social contacts – all of which benefit their health and mental health.

Access to a Car and the Self-Reported Health and Mental Health of People Aged 65 and Older in Northern Ireland.
Doebler S
Res Aging. 2015 Jun 7