Actinobacteria are well known for their high biosynthetic ability to yield secondary metabolites, that are characterized by peculiar molecular structures often highly complex and rich in stereogenic centers, produced in enantiomerically pure form. These molecules display a broad spectrum of biological activities including antibiotic, antifungal, antitumor, antioxidant, effects as plant promoting growth and immunosuppressive property. Of note that among the bacteria known for their secondary metabolism, Actinobacteria produce about two-thirds of all derived active natural products in current clinical use. 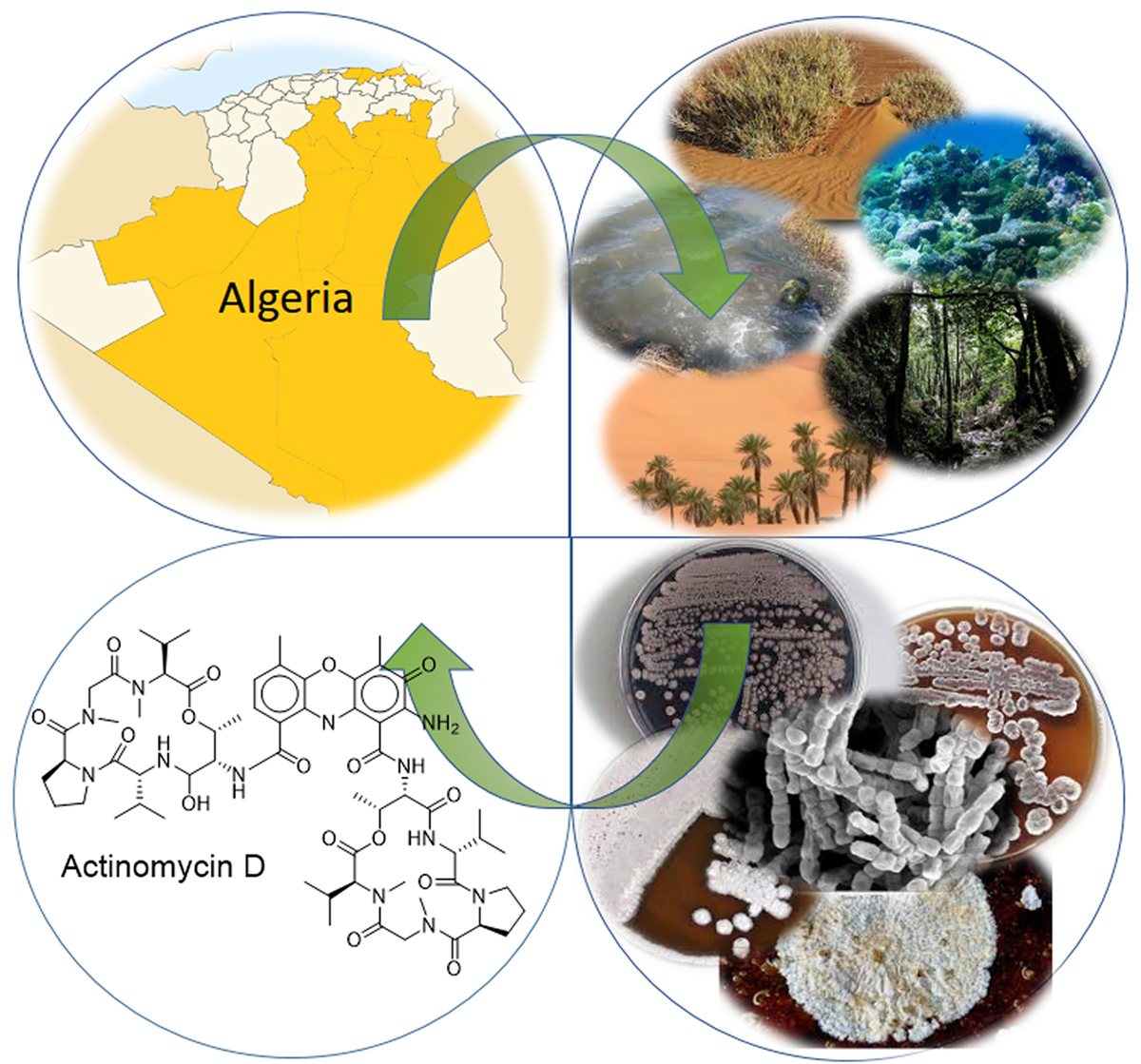 Actinobacteria are ubiquitous and represent the most dominant bacterial population within soils. An increasing number of novel and rare actinobacterial taxa continues to be reported from natural habitats and the study of extreme and underexplored environments, such as marine, forest, semi-arid and desert ecosystems has focused a growing interest. These environmental features affect the biodiversity, that is very rich in actinobacteria, and to a great biodiversity corresponds a wide chemodiversity of metabolites. Therefore, the potential of this approach consists in the discovery of novel strains with new metabolic pathways and new gene clusters offering a successfull chance to discover novel bioactive metabolites.

Algeria has a great climatic diversity ranging from mountains in the Northern regions to the world’s hottest Saharan desert in the Southern region, passing through semi-arid areas. As recently reported in our overview on this topic, the exploration on rare and novel genera and species of Actinobateria present in Algerian habitats started several decades ago. Twenty-nine novelly discovered rare Actinobacteria species were reported in the period 2002-2019, isolated from different ecosystems, mainly from the Saharan soils and palm groves, where 38% of the most abundant genera belong to Saccharothrix and Actinopolyspora.

A transdisciplinary research, closely combining studies on biology and chemistry of natural products is essential to identify the molecular structures of the metabolite responsible for the bioactivity. The biological work can include the selection of nutritive sources and culture conditions applying a statistical approach to optimize the metabolite yield. This approach was applied in our study on the improved production of the anticancer drug actinomycin D (Fig. 1), isolated from a Streptomyces sp. strain collected in a Saharan region in Algeria.

From the 50 secondary metabolites belonging to different chemical classes reported from Actinobacteria collected in Algerian habitas, 17 new molecules were obtained exhibiting interesting bioactivities. An example is represented by the isolation of nigericin and related polyethers from Streptomyces youssoufiensis collected in an Algerian semi-arid soil, which showed to affect significantly the glioblastoma stem cells proliferation, and therefore of promising interest in the development of a potential drug to treat this aggressive brain cancer. A further case study is given by a new polyketide, which represents the lacking member in the series of phaeochromycins, from an endophitic Streptomyces strain isolated from a brown alga Fucus sp. The compound exhibited a selective and potent bacteriostatic activity against methicillin-resistant Staphylococcus aureus (MRSA), the most commonly occurred antibiotic resistant bacterium responsible for human infections. This is relevant in the light of an increasing incidence of antibiotic-resistant bacterial pathogens like those of the ESKAPE group.