For a patient to benefit from the therapeutic effects of any medicine, the prerequisite is that the drug is adequately absorbed after drug intake. Unfortunately, at least 40% of the marketed drugs and up to 90% of the candidate compounds in pipelines are estimated to have unfavourable properties for oral absorption (i.e. having low water solubility and/or permeability across intestinal barrier). Modern pharmaceutical technology used various “candidate-enabling” approaches to improve oral drug absorption and transformed such poorly soluble molecules into new medicines. One of the emerging approaches is the addition of phospholipid (PL) to form PL-based solid drug formulations. 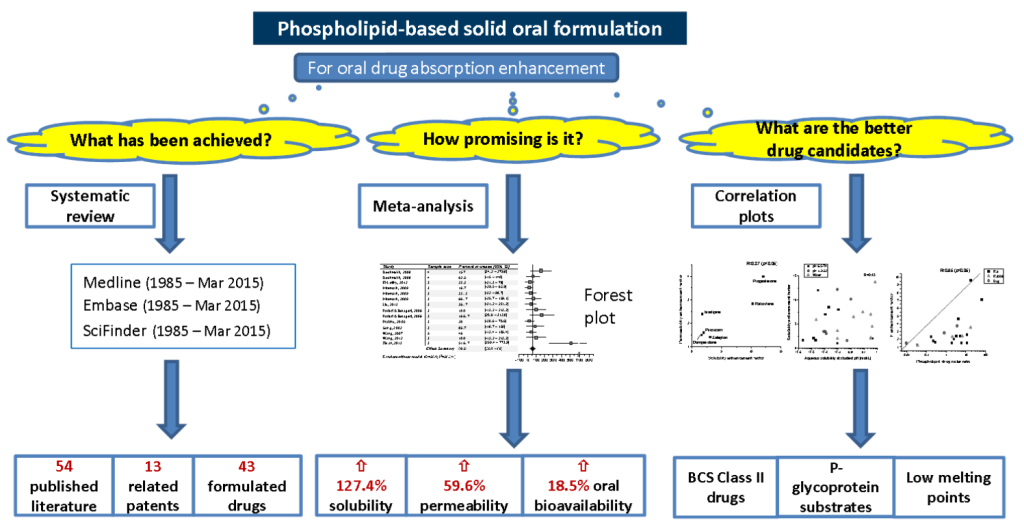 PL is a biocompatible and biodegradable excipient with great flexibility in design. Solid PL-based drug formulations are particularly attractive since they have distinct advantages on improved physical and chemical stability and the possibility to formulate into solid dosage forms (e.g. tablets, capsules, etc.). Since its first introduction in 1986, numerous attempts using PL-based solid formulations for oral drug absorption enhancement have been described. However, systematic knowledge about their usefulness is lacking. By conducting systematic review and meta-analysis, we have screened the available published material for their successfulness, and addressed three questions regarding the use of PL-based solid drug formulations for oral absorption enhancement: “what has been achieved?”, “how promising this method can be?”, and “what are the better drug candidates”.

We performed a systematic search of references in three evidence-based English databases, Medline, Embase, and SciFinder, from the year of 1985 up till March 2015. A total of 54 research articles and 13 patents that applied such formulations for oral absorption enhancement were identified. These formulations included 43 different drugs with poor water solubility and/or permeability. Meta-analyses were conducted to measure the overall enhancement power (percent increase compared to control group) of solid PL formulations on drugs’ solubility, permeability and oral bioavailability (the extent of drug being absorbed in vivo), which were found to be 127.4% (95% CI [86.1, 168.7]), 59.6% (95% CI [30.1, 89.0]), and 18.5% (95% CI [10.1, 26.9]) respectively. These numbers could be interpreted as how many folds of increment caused by the formulation. Solid PL formulations caused an overall improvement of drugs’ solubility, permeability and in vivo oral bioavailability by 1.3-fold, 0.6-fold, and 0.2-fold respectively. By performing correlation plots between the enhancement factors and in silico physiochemical properties of drugs, we concluded that drugs which belong to the Biopharmaceutical Classification System Class II (i.e. drugs having low solubility but high permeability), being P-glycoprotein (P-gp, an efflux transporter) substrates, and/or having low melting points, are better candidates of using PL-based solid formulation approach to enhanced oral drug absorption.