Adenovirus infection in children with bronchiolitis or recurrent wheezing

In our study children, up to 48 months of age, with acute bronchiolitis or recurrent wheezing, were investigated for the presence of AdV, RSV, MPV and PIV, in the nasopharyngeal aspirate (NPA), detected in association (more than one virus, AdVa) or in the isolated form (AdVi, RSVi, MPVi, PIVi). 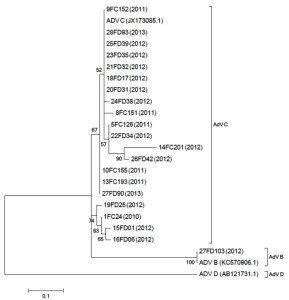 Fig. 1. Phylogenetic tree based on ML algorithm of human AdV sequences (N=21) represented with the year of detection. AdV species C, B and D (outgroup) retrieved from the NCBI databank were included in the analysis to establish a phylogenetic relationship with AdV sequences from the study

Of the 39 AdV-positive samples, 21 were successfully sequenced. The phylogenetic analysis indicated that 20 were species C AdV and one was species B AdV (Fig. 1). The clustering of the samples in the phylogenetic tree was not related to the year of AdV detection or any specific clinical feature.

Concerning disease severity, we observed no statistical significance in the number of patients with co-infection (AdVa) and mono-infection (AdVi,RSVi,MPVi).

Although we detected AdVi and AdVa more frequently in children with recurrent wheezing (17/29 and 7/10, respectively), to our knowledge, there are no studies demonstrating the role of AdV in the pathogenesis of recurrent wheezing, as has been suggested in asthma and in experiments in guinea pig, that showed an increase in lung inflammatory response, due to AdV .

As our study used a convenience sample, in a specific Hospital, its results cannot be extrapolated to the general population.